MURCIA’S bars and restaurants will have to close between 6.00pm and 9.00pm on four days of the festive season.

The closure window will apply to the region’s hospitality trade on December 24, 25, 31 and January 1.

The measure announced today(December 21) is aimed at preventing crowds building up in the streets on the four evenings.

Up to ten people from three families will be allowed to meet on those days be it at home or at a bar or restaurant.

The rules over gatherings are more generous than the neighbouring Valencian Community which has a six person limit and is implementing a midnight curfew on the two evenings.

One key reason is that the infection rate in the Murcia region is currently around 30% below the national average.

Murcia’s regional border will however remain closed during the festive season. 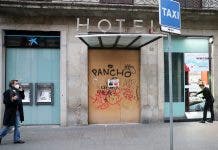