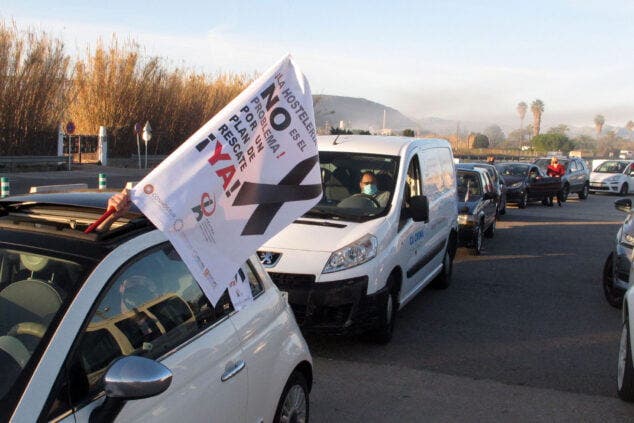 AROUND 200 cars brought Denia to a halt today(January 28) in a protest over the closure of the Costa Blanca hospitality sector.

The motorcade was organised by the Marina Alta Hospitality and Tourism Business Association(Aehtma).

Hospitality groups and catering suppliers travelled from Javea and Teulada-Moraira to take part in this morning’s demonstration as car horns blared across Denia’s streets.

Banners were displayed on the vehicles proclaiming the woeful predicament for local bars and restaurants after the high rate of COVID-19 infections forced the regional government to shut them down on January 21.

Aehtma president, Cristina Selles, said: “We are desperate and we believe that the hospitality industry is not a source of virus contagion, but we are paying the price.”

“There are other parts of Spain that have kept hospitality going and have the same infection rates,” she added.

Selles stated that little or no financial help has been provided and called on the vaccination programme to be speeded up to help the sector reopen.

Current rules mean that bars and restaurants will remain closed in the Valencian Community until at least February 15.

Prior to January 21, all hospitality businesses had to close at 5.00 pm, with claims the early shutting had slashed income by 80%.