Home Costa Blanca PEDAL POWER as police pull over a bicycle with a hidden engine... 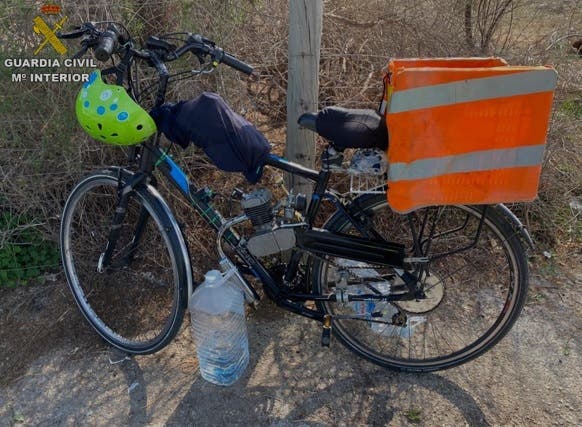 A Costa Blanca cyclist crossed paths with the law after giving his bicycle extra speed by attaching an engine to it.

The 41-year-old man redefined the meaning of pedal power as he whizzed up an incline on the CV-905 in Torrevieja.

A Guardia Civil patrol was bemused by the bicycle’s speed especially as the cyclist did not appear to be pedalling.

They also thought they heard a purring-noise coming from the two-wheeler.

The cyclist realised he had been spotted and decided to revert to peddling the bike himself in the hope of continuing his journey, but to no avail.

He was pulled over and the Guardia patrol discovered that he had gone to a lot of trouble to convert his bicycle into a moped.

A small engine was attached to the bike’s frame and the diesel tank was hidden underneath a T-shirt so as not to attract any attention.

The handlebar had been modified to include links to an accelerator and a brake.

The Guardia seized the bike and took it to the ITV test station in Torrevieja who confirmed it had a two-stroke engine capable of going over 50 kilometres per hour.

The owner faces charges that could cost him fines totalling up to €1,400 including using an unregistered motor vehicle; not having a license or insurance; and not possessing a license to ride it.