ON first arrival in Jimena de la Frontera, you would be forgiven for thinking that it was a sleepy white village with not much to offer.
But, you would be wrong.

White village it may be, but sleepy it is not.

Turning up, unintentionally, at the culmination of their summer festival, the streets were filled with townsfolk and the subtle tones of Spanish classical guitar could be heard amid a carnival of world music.

Amongst the crowds of families and mothers and daughters dressed in matching Flamenco dresses which filled the square, were old couples dancing the paso doble. Even if there had been a donkey idling by, it couldn’t have been much more Spanish.

Overlooked by the 13th century Moorish castle which sits on top of the hill, the small town is the epitome of picture postcard Spain with its whitewashed houses built on some of the narrowest streets in the region.

Trying to manoeuvre a station wagon around such roads was a challenge, but then these streets were made for walking, and most of the 9,000 residents do just that.

Lined with unique and traditional guest houses, local shops and lively bars, the steep streets all snake up to the castle which boasts excellent views of the town and as far out as Algeciras and Gibraltar, on a clear day.

The castle, which was used as a vantage point by many groups including the Romans, Iberians, Moors and Pheonicians at various points throughout history, was seen as a great location for keeping a watchful eye on the area.

And it’s not just for military purposes that Jimena is well-situated.

Local butcher Domingo Calbente says the best thing about the town is its location.

“It is really well situated with so much around – the countryside and the river – and it’s also not too far away from the beach,” he explains.
But, perhaps the most stunning of views to be taken in from the castle look-out is of the surrounding Alcornocales Natural Park, with many hiking and horse-riding options for the more active and the Hozgarganta River for swimming.

If a walk up the near-vertical streets to the castle and back is about as much as you can muster, there are plenty of bars in the town where you are guaranteed a refreshing drink and some friendly chit- chat. 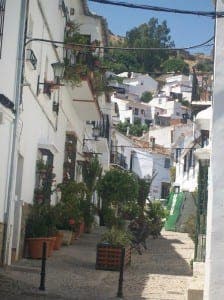 As well as the annual music carnival, Jimena is host to several other festivals throughout the year, the most popular of which is the mushroom collecting in mid-November.

Melissa Gonzalez owns the newly-opened Hospederia Casa Henrietta and says people flock to collect the local Chantarella mushrooms.
“November is a busy time of year, when guests come to pick and try all the different types of mushrooms grown here,” she explains.
“We will be hosting a mushroom tasting week here at the restaurant this year.

“I grew up nearby, but moved to Jimena because it is so typically Spanish and has beautiful scenery, plus the people are so friendly.”

From the more traditional Hostal Anon, with its dining terraces overlooking the Natural Park, to the quirky Bar Marilyn – a shrine to Monroe – the town has a vibrant social scene that is enjoyed by the many ex-patriates who make up about ten per cent of the population.

And if those ex-pats were looking for traditional Spain with a twist, they came to the right place.