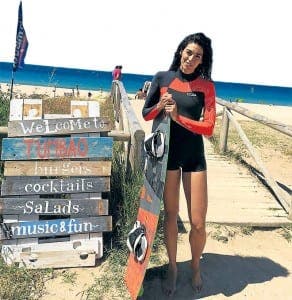 MY bean bag offers a front row seat to one of the best shows in Andalucia.

Parked above one of Spain’s best beaches, I’m sat mesmerized by a profusion of colourful kites, as they bob up and down, almost in tune to the strains of reggae on the sound system.

With a green mountain backdrop and an azure sea in front, you can happily spend the day hanging out, enjoying the buzz, while grazing on fabulous food and superb smoothies.

And, for those who feel active, the place also serves as the home of ion’s watersports centre and the launch pad of half of the world’s best kitesurfers.

“While it used to be just for sporty types, the majority of people come here now because it is super-hip,” explains Chris Ziaja, the boss of ion, formerly the Mistral centre.

It is certainly the spot to take up this fun, high-adrenaline sport, with regular world champion Liam Whaley learning and basing himself here when not touring the world competing.

I recently gave it a go and while the 40-knot winds wreaked havoc with my classes I still had a fantastic time.

Here, boss David Alvarez Trevino, a butcher by trade, works hard to run a happy ship, by bringing in a mix of good DJs and flamenco groups, and serving up the best burgers from his burger truck, which he takes to events around the country.

The main restaurant is also good, while the iZumo smoothy bar has some great drinks such as ‘magic maca’, which is delicious.

Opened by Daniela Di Placido, she has been serving up juices around the world for nearly a decade.

Next door is the funky clothes shop Graffiti, the very epitome of cool.

A third brother James, a film director and producer from London, who passed away two years ago, was also soon involved.

They went from 12 rooms to an extra 23 and and eventually opened a nearby sister hotel Punta Sur.

And it is not just Valdevaqueros that has the X-factor. Hotel Punta Sur not only has some of the most stylish, spacious rooms on the coast, it also has by far the best pool, massive and surrounded by lawns.

Well sheltered from the wind, it is perfect for families and with the addition of a tennis court and pool table, it has something for everyone.

Best of all, this year, the restaurant has added a special pizza oven, to keep the kids happy at mealtimes too.

Fiona Govan - 13 May, 2022 @ 08:00
It had been on my bucket list for years and yet somehow, I had never quite got round to it, but with foreign travel curbed and curfews still in place, it was time to look closer to home and the patios of Cordoba beckoned, writes Fiona Govan.

Marbellous Marbella: Discover the gem of the Costa del Sol

Cristina Hodgson - 16 May, 2022 @ 12:00
THE Costa del Sol is heading towards becoming a five-star destination with the opening of several top-end projects. The tourism sector is recovering from the...