CHRISTOPHER Columbus stares out at the Atlantic Ocean and tells his son the world is like the orange he is peeling: round, not flat.

The scene – from the 1992 Ridley Scott film 1492: Conquest of Paradise – paints Columbus as an enlightened scientific figure, surrounded by haters determined to ruin his plans.

But that is a myth, and the author Washington Irving is largely to blame.

He Americanised the voyager in his best-selling 1828 biography, creating the idea that Columbus was an ‘all American’  seaman willing to challenge academics who didn’t share his vision. 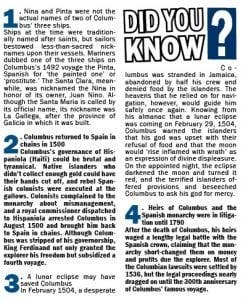 But such an image is far from the truth.

Columbus massively underestimated the size of the earth and thought he could reach Asia and its lucrative markets by going west, all the while avoiding Spain’s Moorish rivals in the east.

He had to beg King Ferdinand and Queen Isabella for their sponsorship, which they only granted out of desperation.

And once he reached America – convinced it was Asia – he made several managerial decisions that created the conditions for mass genocide.

Below we debunk the biggest myths about the early explorer. 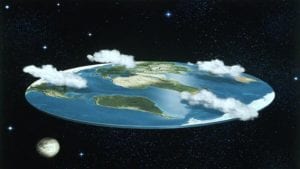 A round-shaped Earth was not news in Columbus’s time. It was already accepted as being more or less spherical.

The more burning questions related to its size and how much of it was covered by oceans.
Florentine mathematician Paolo Toscanelli is credited with inspiring Columbus’s voyage, but neither Toscanelli nor Columbus could convince Portugal’s court that it could work.

Spain’s Catholic monarchs, however, were intrigued. Rival Portugal was pushing east to Asia by rounding Africa. From fear of missing out,  King Ferdinand and Queen Isabella granted Columbus another audience in early 1492. That April, an agreement was signed in the shadow of the Alhambra in Granada and Columbus became an ‘admiral of the ocean sea.’

Columbus was a great leader and businessman

It’s fair to say he was a confident risk-taker who had knowledge of the markets. From sailing the West African coast for gold in the early 1480s, he went on to the sugar markets in the Madeiras, but his sights were set on Asia and its spices. Perhaps if he had reached the easterly continent, he could have proved his worth as a businessman.

Instead he ended up in the Caribbean.

Densely populated and lacking in gold, the island populations had no market economy to match the Old World. Ignoring these signs, Columbus thought he could make regional allies and trade gold for slaves, as Portugal was doing in Africa.

He planted a colony – La Navidad – in north Haiti but when he returned on his second voyage, everyone in ‘Christmas Town’ was dead.

His second settlement, La Isabela, ended in the same way.

La Isabela was a trading post like many found in the Mediterranean. It was intended to survive by trade rather than self-sufficiency but this only led inhabitants to engage in suicidal raids on neighboring indigenous villages.

Columbus’s misunderstanding of local economies and his failure to adapt to local conditions cost not only Spanish lives but also countless indigenous ones. 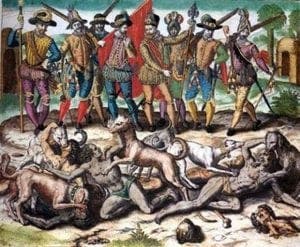 Columbus made coin by enslaving and selling natives from the Caribbean. He would make allies among what he called ‘good Indians,’ before advocating fighting and the enslaving of native groups he presumed to be cannibals. By 1500, he and his brothers had sent nearly 1,500 natives to be sold as slaves in Europe.

Even ‘friendly’ indigenous peoples were forced to mine gold, eventually dying from malnourishment, overwork and disease.
A document discovered 10 years ago in Simancas, Spain, suggests he was equally abhorrent to his Spanish subjects. Witnesses said his government of Hispaniola was marked by routine cruelty.

A Spanish woman who reminded the explorer that he was the son of a weaver had her tongue cut out while others were executed for minor crimes.

While Columbus’ intent was not genocide – he wanted a living and taxable population – the result of his policies and commercial aims led to genocide.

Columbus believed he had discovered America

As far as he was aware, Columbus was discovering new parts of Asia.

He also believed he had found a new route to the East Indies that would circumvent Muslim-controlled passages to the east of Spain.

As Nicolás Wey-Gómez has recently shown, sailing south to the tropics was perhaps Columbus’s main innovation, since he wanted to reach the Spice Islands first.

From there, he could travel to China from a safe commercial base — the fortified trading post he had tried to establish on Hispaniola.

The idea of an entirely new world inhabited by many millions of previously unknown people was simply too much to grasp.

But recent research confirms that the first humans to reach the Americas migrated from northeast Asia to North America via Bering Strait and along the Alaskan and British Columbian coasts some 14,000 years before Columbus.

These earliest and Native Americans made their way south and east, rapidly settling up civilisations.