A COLONY of chameleons is threatening the development of a huge shopping centre and hotel complex on the Costa del Sol.

The protected species has built up a stable population on the 15-hectare site earmarked for the multi-million-euro project in Torremolinos, according to green group Ecologistas en Accion.

Despite opposition from political groups Izquierda Union (IU) and PSOE, the Partido Popular run council has decided to reclassify land near the town’s congress palace for Peel España SL – the development company behind the plan.

The move has forced Ecologistas en Accion to send an official complaint to the Málaga Province Commission for Urban Development.

Spokesman Francisco Gomez said: “This is one of the few areas remaining on the coast where you can find this emblematic animal.

“They have a stable colony here and because it is an animal in danger of extinction, we are pleading with the authorities to step in and stop this huge development.”

Torremolinos mayor Pedro Fernández Montes, however, insists the project is essential for the town’s development.

“This will have no equal in all of Spain. It will draw people to the town from as far as Gibraltar and Nerja.

“It will be the greatest shopping centre in the country and bring much needed prosperity to Torremolinos,” he told a press conference.

He also claimed the shopping centre and luxury hotel complex will create more than 2,500 jobs.

For the project to go ahead, the land will have to be reclassified from “tourist use” to “commercial use.”

According to political opponents in the town hall, this also means increasing the building density levels on the site by 80 per cent and modifying the town’s PGOU urban expansion plan.

A similar rezoning move in Manilva in 2006 led to town mayor Pedro Tirado being arrested on corruption charges.

The scheme in Torremolinos is also opposed by the town’s chamber of commerce.

Business association ACET insists more than 700 of its members have expressed concern over the negative impact the project will have on local businesses.

The news comes just before the expected confirmation of the town’s PGOU for the next ten years.

In the expansion plan, which is expected to be approved in February, 10,000 out of 12,000 new homes for the town are to be built on virgin hillsides, meaning further urban sprawl into the mountains above the Costa del Sol.

The town hall has tried to offer sweeteners to ecologists by insisting developers will be forced to reforest large parts of the mountainside not earmarked for development.

The town is estimating growth of 60,000 people over the next ten years, bringing the population to 120,000.

However by the mayor’s own admittance, he expects “a battle with the Junta de Andalucía regional government” over the PGOU amendments but adds it is the only non-developed land in Torremonlinos. 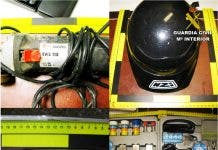