FEW subjects arouse as much controversy orheated debate as does euthanasia. Almost everyone, when probed, has a stance on the issue. Perhaps we can all picture some vague point in the future which has us lying in a state of unbearable pain, powerless to end the suffering. Others, often of a religious or scientific bent, feel that the Hippocratic Oath must be upheld: doctors must do all they can to prolong life, even when that life may not be worth living. Who knows, they argue, a cure may be just around the corner.

The newly approved regional charter giving Andalucía greater autonomy touches this raw nerve. It allows people to sign a legally binding declaration that they do not wish for their life to be extended by extraordinary measures should they enter a non communicable state due to an accident or terminal illness.

What it emphatically is not is a charter for euthanasia. For it to be such it must allow for doctors to actively end the life of a patient through the use of drugs or other means. It does not.

The issue is of particular poignancy in our area with the news that a woman suffering from progressive muscular dystrophy has asked doctors from her Granada hospital bed to switch off her respirator before the symptoms make such a request impossible. The doctors have now been assured that they will not face prosecution if she is allowed to die.

But what is euthanasia and where is it legal? The term derives from the Greek eu, meaning good, and thanatos, meaning death. Currently it is legal for doctors to end the life of a person in Belgium, the Netherlands, Switzerland and some US states, notably Texas and California. In each country the law is very different and the provisos for euthanising a person vary widely. In Texas, for example, the Futile Care Law allows for doctors to withdraw life support systems such as respirators or medication. By contrast Switzerland has a much more controversial law that allows a physician to go so far as assisting suicide if it can be said that the ‘patient’ has made that choice and takes an active role in terminating their life (such as by pressing a button to administer a lethal injection). Proponents say that this allows terminal patients to plan and enjoy their last months of life, comfortable in the knowledge that death will be painless, dignified and accompanied by their loved ones. Many of the patients are foreigners, termed ‘suicide tourists’.

None of these laws is clear cut and criminal investigations may still be launched if there is any suspicion that
the patient did not agree to the ending of their life.

At the heart of the debate is whether euthanasia makes us a more or less civilised society. Those in favour of it say it is unacceptable to prolong the life of a terminally ill patient who is in a great deal of pain and begging for a release. Opponents cite equally moral reasons, arguing it is wrong for a doctor to end life and that by allowing euthanasia is something akin to legalising murder. The provisions in the Andalucía charter are at the soft end of the euthanasia sliding scale.

‘Patients’ must be lucid when they sign the declaration and relatives are powerless to interfere.

If you don’t want doctors in Andalucía to prolong your life should you find yourself slipping towards oblivion you will soon be able to download a form from the Junta de Andalucía’s website www.juntadeandalucia.es/salud 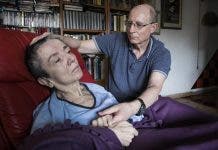 Over 1 million people in Spain sign petitions supporting euthanasia, to be put before Government on Friday 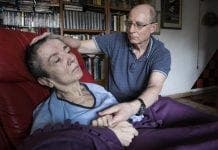 WATCH: Man in Spain helps terminally ill wife with multiple sclerosis die before handing himself in to police