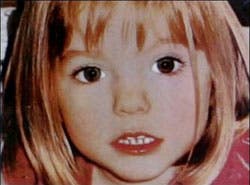 On May 3 it will be a year since Maddie McCann, 3, was apparently abducted from her holiday resort in the Algarve. JON CLARKE was the first UK journalist on the scene that day. Here, he analyses the catalogue of errors that hampered the investigation right from the start

I HAD spent a number of days trying to piece together the most mysterious disappearance of modern times. The three-year-old had literally vanished without trace. But ultimately, as it turned out, it wasn’t such a surprise.

Here I was on a Sunday – four days after Maddie McCann had gone missing – and a pair of overzealous Portuguese border guards were rifling through my car, irrelevent of the press pass I had shown them.

A real show of force, it was, of course, too little too late for a police force that hadn’t even bothered to inform the border of a missing toddler for 12 hours. And worse still took two full days before they actually got organised to start searching vehicles.

Aside from the fact that the CCTV had not been working on the A22 motorway as it tore along the short hour-and-a-half drive to the Spanish border – nor at the expensive Mark Warner resort where the McCann family were staying – it was a fairly comprehensive police disaster.

I had been in Praia de Luz since noon on the day after her disappearance. I had been scrambled by the British dailies to urgently cover the key first few hours of the investigation as they desperately tried to bring in their big guns, via Frankfurt, Rome and even Oslo.

Some 15 hours after Maddie had disappeared, it was straight away apparent that the investigation was lacking urgency.

Sniffer dogs had yet to arrive and any number of neighbours, friends and locals had been traipsing in and out of the holiday apartment where Maddie had been staying with her parents Gerry and Kate McCann and her twin siblings.

People wandered around aimlessly, holding photocopies of the girl. Staff at the resort looked bewildered and unsure what to do.

Most interestingly of all, was the local constabulary’s choice of translater; neighbour Robert Murat, who had direct line of sight of the apartment from the house he shared nearby with his mother. Police never checked his background or his alibi and he was used only because he spoke Portuguese. More on him later.

Bedding was allowed to be washed

Evidence then, was contaminated then from the very first hour. In Britain and America, such an abduction would have triggered an almost instant police dragnet — sniffer dogs and helicopters would have scoured the area while the child’s picture would have been handed to the Press and TV to make it public as fast as possible.

None of this happened and, bizarrely, the Portuguese police decided that a lack of publicity was the best option, to keep suspects in the dark about the investigation’s progress.

But their first big error was failing to seal off the crime scene until later the following day. With all the “helpers” traipsing through the property, any DNA clues found would be as good as useless.

Police boss, Inspector ‘No Clues’ Olegario Sousa – as he was soon dubbed – admitted more than 20 people had entered the apartment touching furniture and opening and closing doors and windows.

But it got worse and it later emerged that police had failed to send Madeleine’s bedding for forensic tests. By the time they revisited the apartment 24 hours after she was taken, cleaners had washed the sheets, blankets and pillowcases. Vital fibres from the abductor’s clothing, or even their fingerprints, may have been lost.

It took the police nearly two weeks before they started interrogating their first suspect. Yes, their first translater Robert Murat.

Living just 100 metres away, his house Casa Liliana was sealed off and his computer and cars were seized on May 14. He was named as an “arguido” — the Portuguese legal term for a suspect — but there was not enough evidence to arrest him or keep him in custody. He has still not been charged with any offence.

Still an arguido, the half-Portuguese, half-English property salesman, 34, had a daughter Sofia, who was Maddie’s age and had lived with him until his ex-wife had returned to live in the UK the year before. He has always insisted that he had gone to bed early on the night of May 3 and only knew about the disappearance the next day.

While it is perhaps hard to imagine with all the drama, shouting and screaming, his mother, Jennie, 71, backed him up.

I remember Murat well from those first few hours at the resort. He was hanging around outside the house and offering anyone titbits of information and offering to help. I had a short chat to him, before going off to try and find some clues of my own.

Eventually, another reporter I was working for the Sunday Mirror Lori Campbell, reported him to the police, who put him under surveillance. He was watched and his phone calls logged.

A shady Russian business associate, computer expert Sergey Malinka, 22, was soon brought in for questioning but not charged, as was his German girlfriend Michaela Walczuch and her estranged Portuguese husband Luis Antonio.

There was nothing concrete to connect Murat to the abduction, despite many hours of questioning and comprehensive checks on his background, movements and property.

British holidaymakers, including the McCanns’ friends, repeatedly claimed they saw him near the complex on the night of May 3, seemingly contradicting his alibi. But in January it emerged that a local estate agent, also in Praia that night, is a remarkable lookalike of Murat. Perhaps it was him they saw and not Murat — and thus his alibi was sound.

Whatever, this didn’t stop the Portuguese press from printing a series number of wild and seedy allegations.

Murat’s lawyer Francisco Paragete defended him to the hilt, while his aunt Sally Eveleigh said: “Robert’s life has been ruined by the most disgusting, cruel allegations imaginable. His only crime was wanting to do anything he could to help find a missing girl.”

Under Portugal’s strict secrecy laws, Murat has been barred from defending himself publicly. But he has said: “I am an innocent man. I am not a paedophile or any of the other things I have been called. I have done nothing wrong. I wake up with this nightmare every morning and I go to bed with it every night.”

With no new evidence to charge him police changed tack and over a period of months the McCanns became the chief suspects. Despite having neither leads or solid evidence, the increasingly desperate Portuguese police decided that they had disposed of her body and concocted an elaborate lie to dupe the world.

The theory was that, being doctors, they had no problem in drugging their children to help them sleep. They had given her an overdose, and knew that if the truth came out they would have lost their jobs, home and children. They would therefore go to any lengths to avoid it.

It was so far fetched, but to this day, many Portuguese and Spanish believe it to be true.

The simple, sad truth is that in the ‘Golden Hours’, as detectives term the hours immediately after an abduction, Portuguese’s finest had been napping. Caught out on the hop, they desperately tried to fight back, to allay the blame. But now, they will forever be known as the clueless force led by, appropriately, an Inspector No Clues.