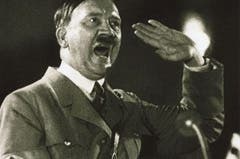 NAZI leader Adolf Hitler spent a month in Spain before fleeing Europe for South America, according to an Argentine investigator.

Abel Basti claims to have found an FBI document, which states Hitler did not commit suicide in his Berlin bunker.

Instead, he flew to Spain with lover Eva Braun and 13 high-ranking Nazi officials.

“They took off from Berlin and landed in Barcelona on April 27, 1945, via Linz in Austria,” claims the journalist, who is investigating post-World War II Nazi activity in his native Argentina.

The FBI paperwork claims the Nazi leader and his party travelled in a Junkers 290 aircraft, which had the serial number 0163.

In the summer of 1945, Allied forces discovered this plane in the Travemünde airbase, close to the German city of Hamburg.

Using its flight documentation, the military traced the aeroplane’s movements to Spain.

In 1947, the US army searched for the Fuhrer, but the Nazi leader had long gone.

“Hitler used Spain as a ‘trampoline.’ He spent a month in the country before escaping to South America by submarine.

“By the time, US soldiers started their search for him, Hitler was in Argentina,” Basti claims.

Germany was an close ally of General Franco, the right-wing dictator who ruled Spain following his victory in the Civil War in 1939 until his death in 1975.

The Germans supplied Franco’s rebellion in the first days of the Civil War with supplies, such as ammunition, weapons and military intelligence.

The German Air Force – the Luftwaffe – is claimed to be behind the bombing of the Basque town, Guernica, in 1937.

Basti, who will soon publish Destino Patagonia. Cómo Escapó Hitler – his third book on Nazi movement in Argentina, believes the accepted suicide of Hitler was “a ruse,” so that the leader of the Third Reich could escape the advancing Allied soldiers.

“The Germans left the body of Hitler’s double in the bunker. The Nazis also left unknown corpses, which had in their pockets the paperwork of the hierarchy that escaped with the Fuhrer. This deceived everyone into thinking they had all killed themselves.”

Basti believes that Hitler, Braun and the 13 officers arrived in Argentina, “between July and August 1945. He then moved between the provinces of Buenos Aires, Córdoba, Mendoza and La Rioja.”

The 51-year-old journalist claims Hitler died in the South American country in 1960.

As reported in issue 50 (Madrid seeks Nazi extraditions), Aribert Heim – the Austrian doctor know as the Butcher of Mauthausen for his vicious experiments on prisoners in Nazi concentration camps – also spent time in Spain before fleeing to Chile.