Priors told their Spanish home was ‘illegally’ knocked down

EXCLUSIVE By Jon Clarke and Matthew Pritchard in Almeria

AN order to demolish the home of an English couple in Spain last year has been overruled as illegal.

The decision by the Andalucian authorities to pull down Len and Helen Priors dream home near Vera was overruled by the Spanish High Court.

The Court ruled that the couple were denied the fundamental rights to defend their case and that the demolition was “a grave injustice”.

The ruling overturns the decision of Almeria’s Court Number 2, on July 6, 2006, which quickly led to the couple’s home Tranquilidad being demolished.

They have since been living in a garage next to the property, and are demanding damages of 600,000 euros from the town hall.

The court did not rule whether or not the licence for their three-bedroom home was illegally given or not. Merely whether the stages of demolition had been undertaken correctly.

“The fact that they were not involved in the legal process damaged their judicial rights,” said the judge at the High Court.

The couple described the move as “very encouraging”.

Len Prior said: “We are very pleased. I really feel this is a step forward and it shows we haven’t been forgotten.”

The Priors’ had bought the land in 2002 and – having secured all the necessary permits and permissions via the town hall – built their house in 2003.

All went well until May 2006 when they received notification from the regional government that the permissions had actually been awarded illegally and their 600,000-euro house could be demolished.

They immediately turned to local solicitor, Victor Muñoz and he engaged a litigation specialist in Madrid to fight the case. As far as the Priors were aware, the case was currently proceeding through the courts.

But on December 16, 2007, they received another letter from the Junta de Andalucía informing them that the case had been heard; and demolition would take place on January 9.

No further appeals would be admitted.

At no point had the Priors, or their lawyers, been informed of the final hearing that decided the fate of their home.

The bulldozers duly arrived and the house was pulled down, making international news and sending yet more shockwaves around a region teetering on the edge of financial freefall.

The Priors are now meeting with lawyers on Friday, April 17 to discuss the implications of the sentence.

A demonstration earlier this year by hundreds of expatriates in Almeria demanded that the Spanish legal system dealt fairly with cases such as the Priors. 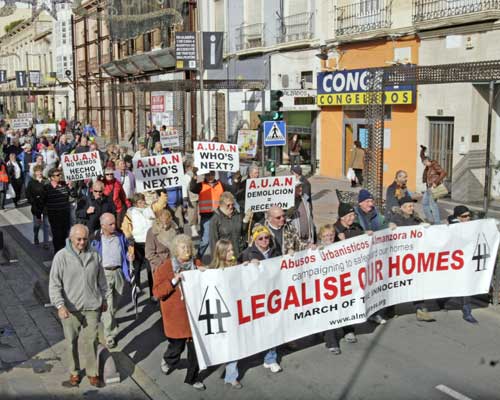 Mr Prior said he thought the demonstration march organised in January to mark the first anniversary of his home’s demolition had had a major impact.

“The Junta official we met with to discuss our case told us three times we shouldn’t organise any more marches which shows he was worried by it.”

Last month an EU report by Danish Green Party MEP slammed the practices of Spanish authorities over human rights and the environment.

The report was passed in the European Commission by a vast majority of MEPs and Spain is now expecting a huge fine.