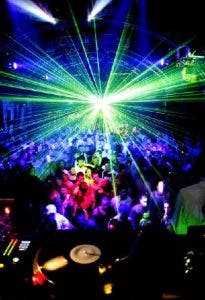 A DRUG-FUELLED rave sparked a 24-hour nightmare for the people of Gaucín – and beware the next one is scheduled for Cortes de la Frontera.

Debauchery, vomit and excrement were the disastrous side effects of a town-hall approved party that wreaked havoc on the town’s unsuspecting residents.

More than 2000 teenagers turned up at the Tear Out Nation Festival, some from as far afield as Valencia, to enjoy the night’s excesses.

An international line up of DJs spun records until 9am on Sunday.

Mayor Francisco Ruiz allowed the local school yard of Colegio Publico Guzman el Bueno to be rented out with access to the school’s toilets also being provided.

However, the school’s facilities were simply not enough for the army of revellers, meaning they were forced to take to the streets – ensuring chaotic scenes.

“Amphetamines, ecstasy, you name it, the kids had it,” said retired diplomat Jorge Freyre from Barrio Alto, Gaucín.

“Added to that, kids were being sick in the streets and going to the toilet wherever they could.”

Chris and Madeleine Humphreys, residents for eight years, said: “We were woken by the loud music, and the following morning we were disgusted by the state of the streets.”

“Amphetamines, ecstasy, you name it, the kids had it.”

Another resident, Pilar Osborn, revealed that an anonymous note went round advising parent’s not to send their children to the school the following Monday.

“People were warned about the potential diseases that could still be lurking in the school,” she said

Sue Dorey, 41, whose children attend the school, said: “I was concerned about what the children might find in the playground, but the school had been thoroughly cleaned.”

Meanwhile, the night’s events caused more problems with tourists demanding refunds and checking out at midnight.

A spokesman for the Hotel Caballo Andaluz, said: “Many guests couldn’t sleep and some were so outraged by the noise outside they asked to leave and demanded their money back.

“The problem is this town’s economy is half-dead so we need the visitors, but this was just way too much. This sort of party needs to be outside town.”

But Mayor Ruiz defended the decision of the town hall to host the rave and insisted that it was trouble-free.

“It went very well with no problems at all, I did not hear of any bad behaviour. I just wanted to do something for the young people of this town,” explained Ruiz.

“I have not received any written complaints but, yes, there were verbal ones.

He divulged that the council had received a fee of 1,500 euros, but denied he had benefited financially himself.

One reveller Ellie Wright, 20, admitted that a chronic lack of toilets caused problems. She said: “I saw no bad behaviour. But without doubt the toilets were inadequate.”

Both Sevilla and Huelva turned downed the festival before Gaucin accepted the offer.