THREE serious UK sex offenders are on the loose on the Costa del Sol.

The trio are being sought – along with seven other wanted UK criminals – by Crimestoppers in their latest Spanish crime campaign.

Stephen Burnell (bottom row, second from left), Fatah Benlaredj and Martin Anthony Smith (top row second and third from left) are all believed to be living on the coast and are said to be extremely dangerous.

Burnell, 56, is on the run following attempted rape and numerous indecent incidents involving children.
He sports a tattoo on his left arm of a dog, cat and tiger in addition to a skull on his right.

Smith, 44, is wanted for a number of crimes involving underage children that took place between 1995 and 2005. He might be on the run with his wife and five-year-old daughter.

Benlaredj, 32, born in Algeria, is wanted for the rape of a seven-year-old girl – he originally befriended her mother using a social networking site.

“These appeals include some very nasty individuals and crimes, and we need you, the public, to help us put them behind bars where they belong,” said Director of Operations, Dave Cording.

“Please don’t approach these individuals as they are known to be dangerous, but if you recognise any of them, or you know where they may be located please contact Crimestoppers immediately; all information is taken in total anonymity.”

“These appeals include some very nasty individuals and crimes, and we need you, the public, to help us put them behind bars where they belong,”

Working alongside the Serious Organised Crime Association (SOCA), Crimestoppers has had a very successful series of campaigns in Spain.

Since launching their Most Wanted schemes in 2006, 23 out of 40 wanted criminals have been apprehended.

Last year the Olive Press helped to track down one of them, after a tip off from a reader.

Daniel Johnston was eventually arrested at the home he was renting in the village of Pruna, in Sevilla province.

The other seven criminals include Benjamin Murphy, 29, who is wanted for a diamond robbery, and Paul Walmsley, 30, is sought for the conspiracy to supply Class A drugs.

Mark Ronald Brown, 44, is believed to be the head of an organised crime gang smuggling heroin into the UK.

Joseph Stephen Morley, 46, failed to return to prison after being sentenced to 15 years for conspiracy to import a Class A drug.

CRIMESTOPPERS has confirmed that one of Operation Captura’s most wanted men handed himself into the British Consulate in Majorca.

Michael Eddleston, 27, from Doncaster, was wanted in connection with three counts of illicit trafficking in narcotic drugs and psychotropic substances.
He is the first man featured on the latest most wanted list to be arrested.

“To have a wanted individual hand themselves in within a week of the launch of Operation Captura is a fantastic result,” explained Crimestoppers’ Founder and Chair, Lord Ashcroft.

Have you spotted any more of the group? Please contact the Olive Press newsdesk on 951166060 or jon@theolivepress.es 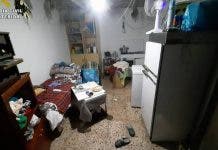