HAVING spent five hours slaving over a giant paella, Jamie Oliver had finally embarked on his victory march.

Pushing his steaming piece de resistance through the narrow village streets the celeb chef was heading straight for the square to serve up his mammoth offering.

For the whole village had turned out to watch in amazement as Britain’s most famous chef scuttled round a huge frying pan in the heat of the Spanish sun.

And pursued by hundreds of ravenous Spaniards, the cockney cook had certainly left his mark on Benaojan, near Ronda.

For the whole village had turned out to watch in amazement as Britain’s most famous chef scuttled round a huge frying pan in the heat of the Spanish sun.

Starting from scratch, and with the help of just one other local chef, Oliver gave the fascinated crowd a lesson in cooking the perfect paella.

Hours later, a triumphant Oliver – drenched in sweat – stood back and admired his extravaganza, before embarking on the supposedly straightforward trip to the square.

But Oliver’s moment of glory abruptly ground to a halt when a badly parked car blocked the gigantic paella’s path.

With the TV cameras still rolling and the food fast cooling off, Oliver’s best-laid dinner plans started looking rather delicate.

“I can’t believe this, I thought we had planned this down to the smallest detail,” Oliver bemoaned at the time.

“But we could never have seen this coming!”

Fortunately mayor Soraya García, on seeing the offending car, acted quickly and called the culprit, who – after a 10-minute delay – sped off in ignominy.

It was all part of Oliver’s Jamie Does Andalucia TV show set to be aired shortly on UK television.

He had previously sampled the culinary delights of Ronda and Estepona as part of his busy filming schedule.

And despite this car-parking glitch, the show certainly did go on.

See Jamie Does Andaucia on April 21, on Channel 4 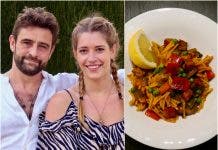