IT is certainly something of a dramatic turnaround. 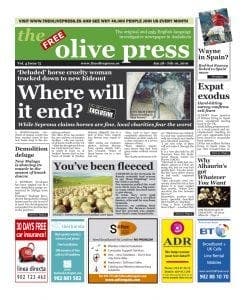 Happy and healthy with a new spring in their step, it is hard to imagine that just 10 months ago these thoroughbred horses were on the verge of death.

Skeletal and seriously malnourished, they had been at the mercy of a ‘deluded’ British owner, who, as reported in the Olive Press, had played God with them for over two years.

Dubbed the ‘horse killer’, Suzanne Jenkins, 35, had already come under investigation after 16 of her horses had died in suspicious circircumstances on her estate in Cadiz.

Already banned from keeping horses in the UK, when she fled to a new hideout in Huelva a year ago, the remaining 33 purebred Trakehners were in a perilous state.

But, thanks to an incredible deal, the owner of the land where she moved them to, has now stepped in and taken over their wellbeing.

In a dramatic volteface Jenkins has now fled Spain and is currently being sought by a number of people she owes money to.

“It has been a total nightmare and cost us a lot of money,” said new owner Juan Berges Torres, a champion horse breeder, from Sevilla.

“But thankfully now we have come to a happy conclusion to that terrible time and they are facing a happy Christmas at last.”

Looking to find homes for the remaining horses, he has spent the last 10 months working with vets and nutritionists to nurse the horses back to health.

Once emaciated, dehydrated and suffering from countless injuries, the 33 horses are now almost unrecognisable, having made a full recovery.

“I knew the horses were in a very bad shape when Jenkins was here and I could see they were just getting worse and worse,” said landowner Berges, who started breeding horses from his estate Yeguada Sierra Norte, in Fuenteheridos, near Aracena, in 2004.

“In February after she fled, it was clear that all of them were in desperate need of help.”

In a tense stand off with Jenkins, it was agreed that she would leave him the horses in return for the thousands of euros she owed him for land rental and upkeep.

“I didn’t do it for the money, just for the horses,” Berges told the Olive Press.

Jenkins is now believed to be back in the UK, where she was convicted of the cruelty and mistreatment of horses, in Gloucestershire.

Her nightmare had deepened after she fled to Spain with her remaining horses in 2008, only to see 16 of them die at her parents’ finca near Medina Sidonia.

When the Spanish authorities stepped in to investigate, she found her controversial feeding practices come under close scrutiny.

While she denied she was responsible, blaming it on a lack of clean water and thorns in the hay, local animal charities were sceptical.

When the Olive Press confronted her in 2008 she made a number of excuses and said: “You have printed a load of lies about me.”

There is no doubt her problems are anything but over. One of her former employees revealed: “We’ve tried to locate her countless times through lawyers but still have no idea where she is.

“She owes a lot of people money,” he added.

It also comes after her ex-boyfriend, Danny Robinson, got in touch with the Olive Press, pleading for an address for her. “I stupidly funded the movement of ‘her’ horses to Spain and have not seen my money returned (around £40k) and as a result have had to file for bankruptcy.”