A CUSTOMER of a private bank in Gibraltar is fighting for the return of 40,000 euros that was wrongly sent to a third party on the strength of one rogue fax.

Diane Taylor appealed to the Olive Press after Jyske Bank transferred the money to a random bank account in Thailand.

The former Formula 1 marketing executive was in Morocco when the request for the money arrived in her name.

Incredibly, she insists the bank failed to check the payment with her and wired it to the Far East as requested.

Even worse, when the discrepancy was realised, she claims the bank failed to return the money immediately.

She is still fighting to get it all back two months later.

“They are an absolute disgrace and they ought to be exposed,” Taylor told the Olive Press.

“While I have managed to get most it back, they have not yet paid everything back.”

Now, the mother of one in her 40s revealed that she had been forced to bring in lawyers to deal with the matter.

She is particularly angry that the bank refused to give the money back despite the fact that she was 10,000 kilometers away from the fax’s source at the time.

Indeed, it was not until the Olive Press intervened just before Christmas that she started to make headway.

“It is incredible this only happened with the heavy threat of the press,” she said.

But Diane is still fighting to get back the rest of her money and is considering suing the Danish bank that has long had connections in Gibraltar.

A Jyske representative said: “Due to confidentiality reasons Jyske Bank (Gibraltar) is not in a position to comment on any concrete cases, nor can we confirm or deny whether we hold a relationship with Mrs Diane Taylor.”

Jyske has been in Gibraltar since 1987, when it acquired Banco Galliano, the oldest bank in the colony with a 120-year history. 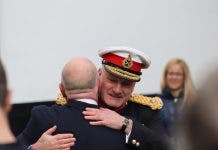 John Culatto - 20 Feb, 2020 @ 21:06
The John Mackintosh Hall is now more sustainably equipped with Governor’s Parade next to get a major facelift after a long time in the shadows.