STROLLING into Gibraltar is rather like walking into a dream where everything is strangely familiar, but just a little bit different.

For an English girl who has spent the last few years living in Spain there is a distinct sense of coming home, a reassuring familiarity that made me feel quite nostalgic.

A warm pint of ale, a packet of PG Tips and a visit to the cinema, I was as happy as the monkey I saw swinging just off Main Street.

But it also quickly became clear that Gibraltar – despite its six square kilometre size – has a lot more to offer than Morrisons, a bacon butty and duty free cigarettes.

Certainly there are as many differences as similarities to life back in Britain. And the people of the Rock are as proud to be Gibraltarians, as they are to be part of Britain.

Ask anyone what they like about  ‘Gib’ and the sense of pride is clearly obvious as they gush about the weather, the lifestyle, the history and the people.

“When you cross the border you are entering a new world,” explains Gail Francis Tiron from the tourist office.

“For British expats who live in Spain there is a real safety element; a kind of home abroad.

“But there is also a lot of history and a vibrant mix of culture.”

This is perhaps not surprising, Gibraltar being at the crossroads of the Mediterranean and the Atlantic, and sitting at a strategic location between Europe and Africa.

In Greek mythology Gibraltar is actually referred to as ‘Calpe’, one of the fabled Pillars of Hercules, which marked the edge of the Mediterranean and the then known world (the other pillar Jbel Musa lies just across the sea in Africa).

The enclave has long boasted a unique mix of cultures, a veritable melting pot of beliefs and even a language that combines English with Spanish in an unusual hybrid that sounds, well, quite frankly, bizarre.

The bewildering code-switching between English and Spanish is known as Llanito, and where the word ‘gibberish’ almost certainly comes from.

The population is made up of a mix of Italian, Jewish, Maltese, British, Portuguese and Genoese, which has oddly led to an increased sense of community that transcends ethnic and religious divisions.

“We are an example to the world,” remarks former mayor Solomon Levy MBE when explaining the harmonious way everyone lives together.

Certainly, I was struck in the few days that I spent on the Rock by the community spirit and just how friendly the people were.

Meanwhile the architecture is almost as eclectic as its people with a fine mix of Georgian and Victorian buildings standing alongside those with a Portuguese, Genoese or Moorish influence.

All this of course feeds out of a tumultuous history which dates back to Neanderthal times. 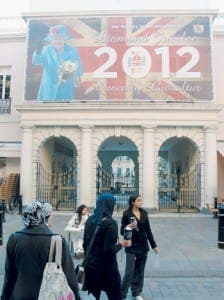 According to respected historian Professor Clive Finlayson of the Gibraltar museum, ‘Gibraltar has multiple histories.’

And as you wander around the Rock, you will find remains of the legacy of the Phoenicians, Romans and Moors.

The Phoenicians were the first civilisation to build a fortified base here.

Then following the demise of the Roman Empire, the governor of Tangier Tariq ibn Ziyad landed at Gibraltar in 711 to launch the Islamic invasion of the Iberian Peninsula.

The Rock took his name – Jabal Tariq (Mountain of Tariq) – which eventually became anglicised to become Gibraltar, as we know it today.

The Arabs went on to rule for seven centuries.

It was only much, much later that it fell into British hands after it was ceded to Britain by Spain in the 1713 Treaty of Utrecht following the War of the Spanish Succession.

The British garrison was formally declared a colony in 1830 and the streets of Gibraltar are still full of reminders of Britain’s glorious past.

Admiral Horatio Nelson famously died on the deck of HMS Victory in 1805 at Trafalgar, during the famous battle less than 50 miles up the coast near Vejer.

According to legend, during the stopover in Gibraltar Nelson’s body was packed in a casket of brandy to preserve it for the long trip back to England and later, during the crossing, thirsty sailors snuck a tipple from the casket.

Nelson experts now consider this to be unlikely. But the rumour has given rise to the phrase ‘tapping the admiral’ referring to illicit drinking.

On a more serious note, you can also pay a visit to the evocative Trafalgar Cemetery where some of those who died from wounds inflicted in the famous battle were laid to rest.

And of course no trip is complete without a visit to the top of the Rock, far above the hustle and bustle of the city centre.

Visitors can take a cable car to the top where they will get unrivalled views.

I, however, was forced to take a bus – a free one, as it turns out (they are all free apart from the border bus) – that took me halfway up as the cable car was closed for maintenance.

The bonus was sitting next to local lad Leo, who pointed out some of the sights as we snaked our way up roads that seemed far narrower than the bus.

He gave me a clear picture of how Gibraltar has changed over the years and after an enjoyable trip down memory lane, I was left to walk the rest of the way, giving me a chance to fully appreciate the nature reserve… and getting a bird’s-eye view of a plane taking off from the runway below.

Looking inland from the 1398 foot summit you can also make out the beautiful Serrania de Ronda and out to sea across the Straits lie the Rif Mountains of Morocco.

Of course, what makes the top even more interesting are the Barbary Apes, by far Gibraltar’s most famous tourist attraction.

It turns out, Gibraltar is the only place in Europe where monkeys range free and plenty of myths surround the story of how they came to be here… but it is now most commonly accepted that the creatures, native of North Africa, were introduced by the British during the 18th century.

I had of course heard a lot about the apes – which are actually tailless monkeys – but I was still surprised to see how close they really come up to you.

They are quite used to having their photo taken and even seem to pose for you. 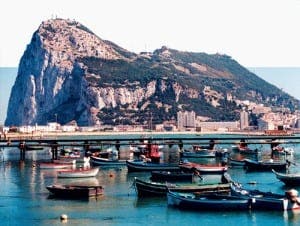 However I had made the schoolgirl error of forgetting I had a sandwich in the top of my handbag and was caught off guard when one of the monkeys made a grab for it.

An interesting tug of war ensued, which I luckily won – but only just.

Minutes later, the same monkey jumped on to my back and made another bid for my lunch but this time I was saved by a nice Romanian couple who were visiting for a few days.

With my new entourage for support I continued on my merry way taking heed of the signs telling tourists not to feed them. It is actually illegal (hefty fines are in force) and bad for their health.

And it is a risk not worth taking, especially if you are British and believe the myth that as long as monkeys remain on the rock the territory will stay under British rule.

Even Winston Churchill apparently believed it, choosing to bolster the dwindling numbers during World War II.

It was Churchill who also constructed a fortress inside the rock, believing an attack from Hitler was imminent.

He found space to house 16,000 troops who did not see daylight for months at a time. There was even room for General Eisenhower to have an office.

Today it is possible to visit both the World War II tunnels and the great siege tunnels which were built in the late 18th century.

It is also worth paying a visit to the ‘City under Siege’ exhibition which gives you a glimpse of the appalling conditions the solders were forced to endure and even includes 200 year old graffiti.

“It has got a lot going for it with a lot of history.

“A lot of people think we just have cheap booze and fags,” she added.

“But they should come and stay for a day or two and we can show them there is a lot more to see, whether you are interested in diving, botany, caving, archaeology or bird watching.”

As I finally enjoyed my sandwich from the safety of the lower rock, I couldn’t have agreed more.