“I HAF three houses for you to look,” said Kurt, our German estate agent. “So I hope you are full of the beans.” He marched off down the street.

His muscular legs covered distances in long, swinging strides, while we panted pathetically behind him.

Desperately trying to anticipate his next move, we concentrated on his retreating back.

Frequently he made unexpected left or right turns, resulting in Joe and me crashing heavily into each other in a frantic effort to keep up. It must have looked like some silly Laurel and Hardy sketch.

The first house had no roof.

“Is this it?” Joe muttered to me from the corner of his mouth. I rolled my eyes, but didn’t reply.

Kurt ignored our dismayed expressions and unlocked the front door with a flourish.

Well, that was true. All the rooms were light and airy, too, as expected from a house with no roof.

In the kitchen, clumps of weeds sprouted from between the cracked floor tiles. We halted in a bedroom and looked up at the sky above.

“It’s, er, very nice,” I said, “but actually I think we might prefer a house with a roof.”

Kurt’s flaxen eyebrows shot up in surprise, as though we had asked for an indoor sauna, or home cinema.

“Ja, but I think you vill like the next house. It has a roof.”

Relieved, we were taken over the mountain to the next house. It stood alone in scrubland, a single ragged palm tree standing guard.

“This is also a good house. It has a roof and a palm tree.” Kurt’s blue eyes challenged us to find fault this time. 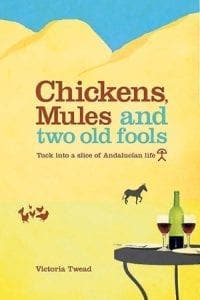 To be fair, the front of the house looked quite impressive, but neglected.

Joe disappeared around the corner of the building while Kurt fumbled the key into the lock.

Yes, it had a roof. And a palm tree. I couldn’t help feeling quite excited. Kurt finally unlocked the door and tried to push it open. The door resisted, so he shouldered it. Still it stood firm, forcing him to give it a hefty Germanic kick. Success.

The door swung open and Kurt and I both jumped in surprise. There, in the middle of the room in front of us, stood Joe.

“How did you get in?” I asked, astonished.

“It’s got no walls at the back. Or down one side.”

“No valls, but this is a good house. It has a roof and a palm tree,” said Kurt, recovering, clearly confident that we could overlook this minor flaw.

We continued the tour.

Joe was right – several walls had caved in, rocks lying where they had fallen. Birds flew shrieking as we disturbed them in the kitchen.

Soft rabbit and goat droppings squelched underfoot. Two feral cats burst out from a corner and slunk away over the hillside.

A cold wind blew more debris into the house, depositing it on the mound that had already accumulated over time.

“I think we need a house that has a roof and walls,” said Joe firmly, and I nodded.

Kurt did not seem discouraged. We exited and he locked the door behind us again.

“What’s the point of locking the door when the house has no walls?” I asked, curious.

“Insurance,” he said, flicking the forelock from his eyes.

“Now, I haf one house more. It is a very good house. It has valls, and a roof, but no palm tree. You vill follow me.”

We climbed back into the car…

EXCLUSIVE: This is no comedy – Madeleine McCann prime suspect has no right to call a new book on the case ‘a comic’