DOZENS of expats have been forced to flee their homes after wildfires threatened an Andalucian town.

Firefighters and the military spent much of the weekend battling the blaze, which broke out on the outskirts of Bedar in Almeria, and remained on site on Monday as a precaution.

A total of 240 people were evacuated and made to spend the night in temporary shelters after the fire spread among pine trees on a hill overlooking the town, destroying around 250 hectares.

“It was horrendous, there has been a lot of devastation and a lot of people have lost their gardens and suffered damage to outbuildings,” Joanne Desmond from Olive estate agents in Bedar told the Olive Press on Monday.

“It was really frightening and very hair-raising but the emergency services have been unbelievable, they are absolutely amazing and were still fighting it last night.”

“It came very very close to a lot of houses, including ours, so the overriding emotion is one of relief that it wasn’t worse.” 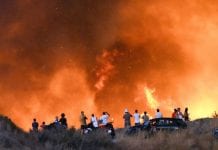 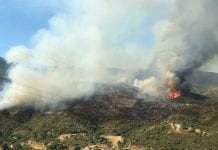 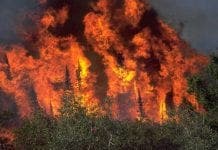 WILDFIRES have destroyed thousands of hectares of land this year, accelerated by drought and heatwaves