SINCE Brits swapped Scarborough for the Spanish coast in the 1960’s, foreign tourism has not only generated billions for the country, but also led it to steam-roll much of its own culture on the costas for the sake of pints, pies and Yorkshire puds.

With The Sun recently facing a backlash after labelling Spain’s most famous resort ‘Benidoom’, The Olive Press takes a look at the resorts that have made the headlines for all the wrong reasons, completed with their very own unique ‘thug rating’.

A forest of high-rise flats and all-inclusive hotels line the beaches of the town.

Benidorm has become a byword for Brits abroad over the years and is attributed with the birth of the package holiday.

Thousands arrived throughout the summers of the 70s like airborne cattle, intrigued at the thought of a sea side town that wasn’t Blackpool.

By the 1980’s the town was proving to be the most lucrative jewel on the Costa Blanca and Brits were the biggest spenders. Both British and Spanish business owners alike began to cater more and more for the Blighty crowd – fry-ups, football and fish and chips became prominent features in the town, along with drinking of course.

The swilling of Sangria and San Miguel is a popular pastime in Benidorm, and there is certainly no shortage of watering-holes.

With pubs named The Piccadilly, Carnaby Street and the The Red Lion, it’s unlikely that British boozers will feel alien while walking around ‘British Square’.

There is however some of Spain left between the tower blocks and British accents, Benidorm’s Old Town is a pretty maze of white-washed buildings and authentic tapas bars which hosts more than 50 fiestas a year.

Benidorm has also managed to shed the image of the violent binge drinking that other resorts are now renowned for.

With an increase in families and pensioners holidaying there, the drinks still flow but the paramedics aren’t quite as busy.

It is described by the tourist board as a ‘stylish promenade that stretches from one end of the beach to the other, with a mixture of bars and restaurants mingling in with the hotels and tourist shops.’

The British press has been more focused on the decadent side of Magaluf however, and the deaths of several teenagers of late .

At this time of year the resort is a booze-drenched utopia for over 12,000 youngsters from all over the UK as they celebrate the end of school exams and let off steam. 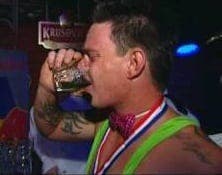 Magaluf’s partying is causing more than a nasty hangover though. Three British youngsters were killed after falling off balconies or down steep stairwells this year alone with many more being seriously injured.

Arriving from cold, grey Britain to the neon-lit main drag of Punta Ballena, it’s easy to see how teenagers can get caught up in the atmosphere of the crowd, and over-indulge in alcohol.

With 25 pence vodka shots as mere appetisers for many revellers, they move on to inhaling balloons filled with nitrous oxide, dubbed ‘hippy crack’ by many of its users.

Popular with the 18-30’s market but an unusual choice for a family holiday and it’s easy to see why, the Foreign Office reports a 132% rise in Brits being hospitalised on the island resort this year.

For years Lanzarote been given a hard time by the press.

Mention that you’re planning to visit the most northern Canary Island and you’ll probably get the ‘Lanza-grotty gags’.

It’s true that Lanzarote does have its lager lout hotspots at some of its coastal resorts, but most of the island is quite the opposite.
Away from the package tours and jet-skis awaits a volcanic paradise unlike anywhere else in Spain.

A surprising amount of agricultural work still exists here amongst the ash, most tended to by hand and donkey because of the rock solid ground.

Grapes are grown in crescents of the crumbled lava to produce Lanzarote wine, which was praised by The Independent last year.

With the sun shining all year round and high winds usually blowing, many find the climate much more comfortable and desirable.

After tales of drunken punch ups, prostitutes, and pickpockets staggering around the party capital of Tenerife for years, the suspicious death of a British man in July has revealed an even darker side to Playa de las Americas.

Lee Mairs, 24, was found lying unconscious on the steps of his hotel with his room ransacked. Three other guests claimed to have been robbed that night, yet the hotel refused to call the police, claiming that Mairs had fallen from his balcony. 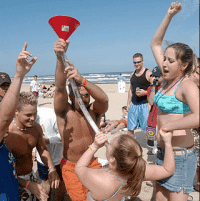 Seen by some as the Mecca for lager louts and timeshare touts, the resort was developed in the 1960’s and now plays host to over a million tourists each year.

The former fishing village has made the headlines recently over a spate of shootings.

Although the violent incidents have been widely reported, the town continues to be as popular with expats and tourists as it has been for the last six decades.

The tourism boom in the late 50s transformed the poor fishing community into one of the Costa del Sol’s first holiday resorts.

The town is also credited with displaying a much more liberal attitude than the rest of the country during Franco’s regime.

The 60s saw a huge increase in nightclubs and discotheques throughout the town, it also homed Spain’s first gay bar, Toni’s Bar. Although the gun toting actions of some individuals may not please the tourism committee, it’s safe to say that almost all of the events have been between criminals not holidaymakers.

Probably not the usual behaviour on a night out in Lloret de Mar, but the mass tourism town has become emblematic of Spain’s seedy resorts and what has been called ‘binge tourism’. 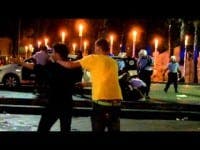 Open prostitution, under-age boozing, and longer drinking hours may be perfect for a lads holiday or stag-do, but the darker side of millions of over-indulging tourists sometimes rears its ugly head.

Not only did the city host a drunken riot that resulted in nine police officers being injured and 20 tourists being locked up, but it also saw the murder of a 15-year-old British expat as he tried to break up a fight between French tourists.

Booze, bars and bikini’s are the images usually conjured up for a trip to Ibiza’s San Antonio.

What was once a small fishing village has been transformed into the dance music capital of the world, known for its nightclubs and sound-systems and not for tranquility.

Drug-related deaths have been reported from the resort since club tourism began in the 1980’s. This summer alone has seen at least one Brit die from a suspected ecstasy overdose.

The Spanish Tourist Board has been working hard meanwhile, to promote more family-oriented tourism on the island, trying to drop the ‘sex and alcohol’ image.

Nearby Santa Gertrudis is a quiet village full of tapas restaurants which trade the techno for flamenco.