TWO Brits have been arrested for possessing 640 fake Viagra pills in Malaga.

The unnamed men, 46 and 47, were stopped by local police in Alhaurin de la Torre for a routine vehicle check after displaying ‘suspicious behaviour’.

During questioning the 47-year-old man admitted the unauthorised drugs belonged to him and he intended to sell them.

The case has been passed on to the Guardia Civil after officers discovered the men had no previous convictions.

Although the effects of the drug are not yet known, a police spokesman added: “These substances could be harmful and they have presumably had no sanitary control. We don’t know their origin and they don’t include any invoice or receipt.” 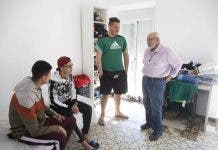