The outfit was one of three that the Spaniard flaunted at the star-studded event, as she later appeared in skinny jeans and a black floral cardigan, followed by a tight-fitting black and pink dress.

The 66-year-old Jones was in San Sebastian to pick up a Lifetime Achievement Award. 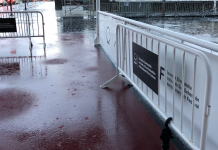