A NEUROSCIENTIST is using paintings to prove his theory that bullfighters are ‘aliens’ compared to other people.

“The mind of the bullfighter is not the same as normal people,” said Malave, who admitted he had not actually analysed any bullfighters since starting his research.

“Anatomically speaking, there are certain areas of a bullfighter’s brain that are more developed than in that of a ‘normal’ human being,” he argued.

“The differences are so profound, the bullfighter might well be considered an alien.”

During his talk entitled The Magic of the Bullfighter’s Mind in Madrid, Malave used Merida’s paintings to explain his theory that an irreversible chemical change occurs in the brain when a novice bullfighter becomes an established bullfighter.

“A bestial change occurs, which from that moment onwards can be witnessed both inside and outside the bullring,” he said.

Malave said the key element forming the brain of a bullfighter was fear.

“The novice fighter feels fear the same as anyone else – and often does not take that step into the precipice,” he said.

“The experienced bullfighter, however, jumps into the precipice knowing he will continue to be scared – and that is when the change occurs.

“This fear transforms the bullfighter’s brain. He ceases to be scared and comes through a completely different person.”

Malave will give the conference again in Malaga at the end of the month. 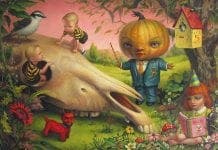