EGYPT’s most famous export will be in Almeria next month to pick up a lifetime achievement award.

Omar Sharif will personally collect the accolade as Almeria Film Festival celebrates the 50th anniversary of perhaps his most famous flick of all, Lawrence of Arabia.

The 80-year-old star, who played Sherif Ali in the 1962 epic by David Lean, will appear at the Maestro Padilla auditorium in Almeria city on December 4.

Almeria’s culture boss Maria Vazquez said festival organisers wanted to honour the Oscar-winning film because it was largely filmed in the province.

Along with a film screening, there will be shooting locations tours, guest speakers and an exhibition displaying some of the props.

Sharif is also expected to unveil a statue of his Lawrence of Arabia co-star Peter O’Toole during his visit.

The festival runs from December 4-8 and boasts a programme of internationally produced short films. 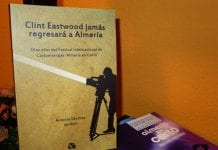 The reel home of film