TAKING its name from a Mexican word meaning ‘testicle’ and branded ‘alligator pear’ due to the scaly appearance of its skin, the avocado is hardly blessed with good looks.

But what it lacks in appearance, the humble fruit more than makes up for in flavour and health benefits, having been found to help lower cholesterol.

High in mono-unsaturated fat, omega-3 and Vitamin E, avocados are also rich in fibre and contain 60% more potassium than bananas.

Known as the fertility fruit by the Aztecs, the avocado has become an integral part of the Mediterranean diet since its introduction to Europe in the 1500s.

The warm climate in Andalucia has led to it becoming a key area for the cultivation of avocados in Europe, with up to 60,000kg produced each year in the Axarquia alone.

While avocados are available in Spain 365 days of the year, now is the perfect time to make the most of the fruit while it is at its best.

The avocado season runs from October to May.

To eat fresh, look for varieties with a ‘give’ to the flesh and do not refrigerate as they will not ripen properly.

Over-ripeness will result in discoloured or mushy flesh. 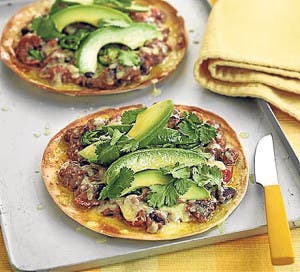 Heat grill to medium-high. Put two tortillas onto a large baking sheet, then grill for two mins.
In a bowl, mix the refried beans, cayenne pepper, kidney beans and cherry tomatoes, then divide half the mix between the tortillas.
Scatter with half of the cheese and half of the sliced chilli, then grill again until the cheese melts.
Lift onto plates and top with half of the avocado and coriander to serve. Repeat with the remaining tortillas.

Is this the end for Spain’s traditional ‘Menu Del Dia’?