BRITISH tourists watched in horror as a routine safety drill involving eight crew members turned into the stuff of nightmares.

Five crew members have died and a further three left badly injured when the lifeboat fell from the upper deck of the Thomson Majesty, docked in the port of Santa Cruz, La Palma, on February 10.

The cruise ship was due to depart for Funchal, in Madeira, later that day.

Thousands of holiday makers, many of whom are British, have been flown back home following the incident.

Pictures posted online showed the damaged lifeboat in the water and rescuers in scuba gear searching the area.

The victims included three Indonesians, a Filipino and a Ghanaian.

It is thought the lifeboat fell from the ship because of a mechanical failure.

The ship was operated by UK-based Thomson Cruises.

In a statement a spokesperson said: “We are working with the ship managers, Louis Cruises, to determine exactly what has happened.

“Our thoughts are with the families of those involved.” 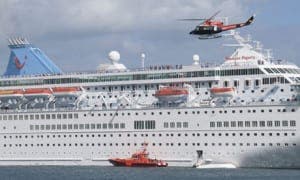 The ship was also involved in a tragedy in 2010, when it was called the Louis Majesty.

Three freak waves hit the 679ft ship, killing two passengers, and injuring a number of others in the Mediterranean.

The latest incident happened just 13 months after the cruise industry was rocked by the Costa Concordia tragedy in which 32 people died.

Unemployment increases in August in Spain, but it is the best data for this month since 2008