THE Rock may look solid from the outside, but inside it is more like a Swiss cheese thanks to an extensive tunnel network built during WWII.

In what resembles the lair of a James Bond villain, the network housed a self-contained community of 5,000 soldiers and is also where General Eisenhower coordinated the allies’ north Africa campaign.

The project – which took three years to complete – was built on the orders of Winston Churchill, who believed that an attack on Gibraltar was imminent.

Such was the importance of the community that Churchill personally visited on a number of occasions, as did France’s General Charles de Gaulle.

With its own hospital, communications system, water and electric supply – as well as equipment stores and vehicles – it could withstand a siege of up to a year.

And collectively with over 30 miles of tunnels, there are more roads inside the rock than there are on the outside.

It meant orders were often passed on by messengers on motorbikes.

Soldiers spent six days a week inside the Rock, working on a rota of eight-hour shifts, which saw three men sharing each bed. 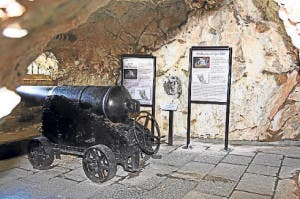 With long days of back-breaking physical work, accompanied by a ban on showering and rations of corned beef and baked beans, the stench in such a confined space is easy to imagine.

Health concerns due to the lack of sunlight meant that workers were ordered to sunbathe on their days off to ensure they got their Vitamin D intake.

Among the men (and 300 women) who lived inside the Rock were clerks, typists and RAF engineers who spent their days assembling spitfires on the airfield below.

Each person had their own individual addresses to allow them to receive post, with every tunnel being given an inconspicuous name such as Great North Road, to avoid detection.

The tunnel network was so well concealed that despite German spies having an extensive knowledge of Gibraltar’s external defences, they were completely oblivious to the activities inside the Rock.

To help maintain the cover, workers would take rocks from a scree slope on the north face of the Rock, which was then topped up under cover of darkness by rubble excavated from the tunnels.

Miners and quarry-workers were recruited to build the network, and today you can even see a drill bit sticking out of one of the walls, having become lodged there 73 years ago.

Other evidence of a former community includes the original cable hooks still in place along the sides of the tunnels and on the so-called Jock’s Balcony, overlooking the airport names can be clearly seen etched into the rock.

It may have been 70-odd years ago, but it seems some things never change.

John Culatto - 3 Feb, 2023 @ 12:32
LEADING environmentalists from Gibraltar will be speaking in a conference and wine gala dinner at the Rock’s own Sunborn floating hotel on March 16. The...