IT is that horrible moment when you start to relax while splashing off one of Spain’s celebrated beaches. A sudden jolt of pain shoots up the leg as a jellyfish leaves a welt the size of your hand on the back of your leg.

Throbbing for several hours, the pain can even last until the next day and leave a nasty rash.

It is a scene that is sadly getting increasingly common today, with the news that Spanish waters are now awash with a swarm of different stinging swimmers of all sizes.

Indeed, jellyfish numbers have tripled over the last few years… and it emerges Spain’s local fisherman are largely to blame.

It is no coincidence that nine out of ten species of fish have been overfished around the world, according to the conservation group Oceana. Some varieties have declined to the point where their survival is threatened. In 2010 Greenpeace added the bluefin tuna to its red list- when numbers fell by 72%.

Removing the top predators, such as tuna and groupers, is altering marine communities and leading to a surge in smaller species such as sardines and anchovies and most alarmingly jellyfish.

Spain is one of the biggest offenders of overfishing. Fact. The country has repeatedly had its knuckles rapped, pulling in far more fish than its quota and leaving stocks dangerously low.

Only last month the country received a stiff fine for overfishing, along with Poland. The country has now been ordered to reduce what it catches in 2014 by a massive 800 tonnes.

It is bad news for Spain’s fishermen. The country’s fishing fleet represents around a quarter of the entire EU fishing capacity and receives the bulk of EU subsidies. According to Oceana, Spain receives a massive €2.8m of official EU funding a year, and the Spanish government has provided €1.9bn in subsidies over the past 12 years.

This has allowed fishing fleets to fund their obsession with overfishing.

Despite repeated warnings and restrictions imposed on Spain’s fishermen over the past 12 years, there is clear evidence that public money is still being used to fund unhealthy marine activity.

In March this year, the country was also fined and ordered to make a 15% cut in its mackerel allowance.

Maria Damanaki, the EU’s fisheries and maritime affairs commissioner, said: “Enforcement of fishing rules is vital for sustainability. When overfishing happens, the damage done to the stocks must be repaired.

“This should happen, whenever possible, without ruining fishermen, in particular those who complied with the rules.”

Mackerel isn’t the only victim of Spanish fishing in the past 12 months. A total of 17 species were being netted into extinction according to the EU.

Due to the gross overfishing, the EU cut the quota of all fish removed from the waters by 800,000 tonnes.

Xavier Pastor, executive director of Oceana in Europe, said: “This annual deduction of fishing quotas is unfortunate, but countries should understand that there are rules to follow not only to be consistent with the law but also for the sake of the species.”

Greenpeace has accused the Spanish government of ignoring the situation in the seas.

The environmental group is concerned that fishermen are still receiving subsidies despite continuing to undertake illegal practices and repeatedly overfishing.

In particular, Greenpeace is critical of Galicia-based Vidal Armadores, a family-run company which received government funding of €16million between 2002 and 2009.

This was despite racking up fines of €3m during the same period, as well as being prosecuted by the British, American and Spanish authorities. This even resulted in the blacklisting of three vessels by the EU.

Unfortunately, this case is far from unique. An investigation (Looting the Seas) by the International Consortium of Investigative Journalists, found more than 80% of subsidized fishing companies in Spain have been fined for infractions.

And this all came with 2013 being the first year in ten when there was an actual reduction in the volume of overfishing… and an actual decline in fines imposed.

EU fisheries boss Damanaki noted the reduction in the total amount of overfishing and said she aimed to continue the trend, as ‘rigorously and fairly as possible’.

“Everything must be in the interests of the long term sustainability of our stocks,” she added.

Popular fish, such as Cod, Sea Bass and Tuna, may still be in great demand, but it is the species that aren’t on every menu that need to be embraced.

According to the EU there are now 25 species of fish not currently endangered, compared to only two 2005.

“These figures show that responsible fisheries management can work,” Damanaki added: “But we still need to strengthen our efforts to end overfishing.”

While it is clear the EU is keeping an eye on the situation and Greenpeace and Oceana are also constantly monitoring the situation, things are unlikely to change overnight.

So expect there to be a few jellyfish arriving on the beaches this time next year as well. 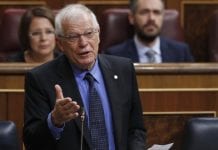