A TRIO of audacious thieves have been arrested after stealing a helicopter to use for drug trafficking.

The chopper is identical to those used by the Guardia Civil, except for one feature – the presence of 400 kg of hashish in the back.

It had been stolen from a site in Cordoba a few weeks ago, before being moved by truck to be hidden in a Dos Hermanas urbanization in Sevilla.

Police found the vehicle as part of an investigation into drug smuggling.

A spokesperson said: “We suspect that this was going to be used for the introduction and transportation of drugs in the country.” 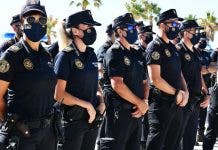 HALLOWEEN HORROR: Arrest made after human head found in bin in Spain’s Andalucia