IT is hard to believe but not only was the coast from Malaga to Mijas once lined with vineyards… but the sweet wines produced were sold to churches, hospitals and even schools!

In an incredible exhibit, the Mijas wine museum has a series of labels from the time which demonstrate the importance of Malaga wines.

“They were some of the world’s most important wines back in the 19th century and were seen as being healthy,” explains owner Carlos San Juan.

Called ‘reconstituyentes’, they were recommended for patients convalescing, as well as for children as a ‘crema infantil’.

The vineyards completely surrounded the city of Malaga, which had hundreds of bodegas producing the mostly sweet wines made from Moscatel and Pedro Ximenez grapes.

“There were a staggering 200,000 hectares under vine in the Malaga region,” continues San Juan, who previously ran the wine museum in Ojen.

Sadly that all came to an end with the phylloxera virus that spread through Spain in the 1870s and the industry was never the same.

However, it was the wine industry which is credited for helping to make Malaga one of Spain’s main cities leading the industrial revolution.

As well as being a museum, the shop, which has now been open for 10 years, has one of the best selections of Malaga wines in the province. You can drink many by the glass and there is a great tapas and lunch menu. 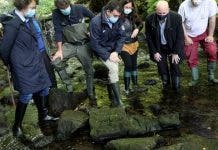