It’s not easy being a Good Samaritan in this town. If you read my column in the last issue of this esteemed organ (Summertime and the livin’ ain’t easy) you’ll recall that I mentioned we are in the middle of High Season, when the Costas are packed with tourists.

After my latest escapade, however, I think we might be better off naming this time of year the Silly Season.

I’ll explain why. I was presenting the Breakfast Show on a well-known radio station a few weeks ago while the normal DJ was taking holiday leave. The Breakfast Show entails getting up at what is technically termed the ‘crack of sparrow fart’ and also means that you drive past the fleshpots of Puerto Banus just as they are throwing the die-hards out of the clubs.

As I sped past the bus stop opposite Banus, I spotted a young man, coated in red, waving frantically. Thinking that he was bleeding profusely, I switched into ‘action hero’ mode and brought my aging Freelander to a shuddering halt (no easy task, I can assure you) and the injured man staggered into the car.

It was then that I noticed two things.

1)That he was staggering not through life-threatening injury but because he was, ahem, slightly tipsy.

2)That the red substance coating his body wasn’t blood. It was tomato ketchup.

The bladdered Brit then explained that the reason he was ‘sauced’ all over was because he had been in an argument with a group of girls in a well-known fast food restaurant (subtle hint – he hadn’t been ‘lovin’ it’) and they had poured the substance over him.

I gave the guy a lift home saying that he was lucky he was covered in tomato ketchup, which I mistook for blood. Had it been Brown Sauce there is no way I would have stopped…

Silly Season continued at the recent anniversary party of a Marbella restaurant. As a highly-trained ‘lifestyle’ journalist who has lived on the coast for nearly 30 years, I have developed a highly-tuned set of skills that can sniff out a free canape or glass of fizz from five miles away. This one was no different, with the cava being quaffed and the free food scoffed.

The entertainment came in the form a pair of gaucho drummers, direct from Argentina, who not only drummed up a storm but also pulled off a series of tricks with traditional hunting ‘bolas’. These are metal balls joined on a string used to bring down prey by tangling around the legs. If you got hit on the head by one of these things, you would know it.

And then they called for a ‘macho man’ from the audience to help. I had taken my new girlfriend to the event and, desperate to impress, can you guess what happened next?

Which is how I came to find myself on stage with a cigarette between my lips as a pair of bolas whistled past my head. To say that I decided halfway through that this was a baaaaaaad idea is an understatement. But the cigarette flew out of my mouth, the crowd erupted and I took a bow like the old pro that I am.

Afterwards I asked my girlfriend if I had flinched at all.

“Your eyeballs didn’t even move!” she replied.

Next time, I’m sticking to the canapes… 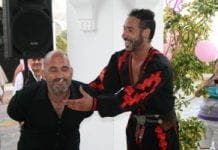