LIONEL Messi’s golden-boy reputation might have taken a hit after he reportedly called Malaga’s Weligton a ‘son of a wh*re’ during Barcelona’s 0-0 draw last night.

Tensions overflowed late in the game when the Malaga centre-back grabbed Messi by the throat and threw him to the ground, following the alleged name calling.

Weligton was booked for his actions, despite a swarm of Barca players protesting to the referee for further punishment.

The veteran defender has now defended his actions, saying Messi unnecessarily ‘provoked’ him.

He said: “I tried to prevent him from passing the ball and, after the move finished, Messi turned to me and called me a son of a wh*re.”

Barcelona  remain top of La Liga, with 13 points from their opening five fixtures. Malaga were the first team to take points off the league leaders and sit in tenth place in the league. 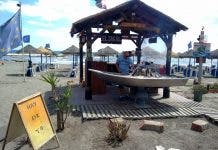