THE Great Train Robbery’s final secret looks to have been let out of the bag in Andalucia after remaining untold for over 50 years.

Gordon Goody – mastermind of one of the most famous crimes in history – revealed the final piece of the puzzle from his home in Mojacar, Almeria whilst filming documentary The Great Train Robbery: A Tale of Two Thieves.

Goody – who moved to southern Spain after his release from UK prison in 1975 – has finally settled many years of debate by identifying the ‘mole’ of the sting as Paddy McKenna, a senior Royal Mail worker from Belfast.

McKenna – previously referred to as ‘the Ulsterman’ – is said to be a devout Catholic who may have given his share of the stolen cash to church charities. 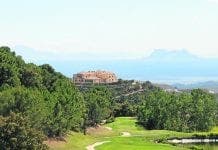 Spanish homes fit for the stars: Which celebs live in Andalucia