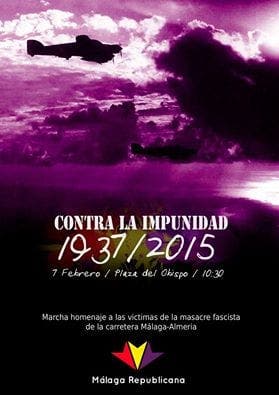 VICTIMS of a civilian massacre in Malaga during the Civil War may finally see justice, as their plight is taken to the Hague.

Campaign group Malaga Republicana – which was set up in December – is pushing for criminal action to be taken against the Spanish state, the Spanish army, the Italian Republic and the Federal Republican of Germany in connection to the massacre.

Estimates say as many as 5,000 citizens were massacred in 1937, when fleeing Malaga after hearing of the imminent arrival of the national troops in the city.

Between 80,000 and 150,000 citizens set out on the Almeria road, but they were attacked by the national side, with the support of Franco-supporting Italian and German forces, according to the group.

Maximo de Santos, a spokesperson for the group, said that historians will ‘collect testimony from the victims and will study documents in the historical and military archives’ in pursuit of the truth.

While Amnesty law prevents the possibility of launching criminal action in Spain, the ‘international law overrules that of Spain’.

“Crimes against humanity should never be permitted,” he added.

The group has joined forces with a group in Barcelona which is seeking justice for the victims of a bombing in the city in 1938, killing more than 1,000 civilians.

A march will be held in support of the victims in Malaga tomorrow, leaving from the Plaza del Obispo at 10.30am.

The march will follow the coastal road towards Almeria as far as Penon del Cuervo.