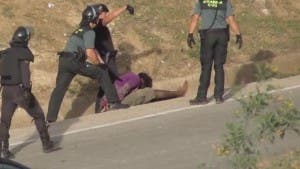 EIGHT Spanish police officers will appear in court to be questioned over the beating of a Cameroonian migrant trying to enter Melilla.

Video footage released by human rights group Prodein in October show the group of officers beating the 23-year-old migrant as he hangs from the border fence between Morocco and the Spanish enclave.

He then falls from the fence into the arms of the group, before they carry him – apparently unconscious – back across the border in Morocco.

The officers face possible charges of failing to provide assistance to a person in danger, excessive use of force, assault and degrading treatment.

Amnesty International has said that while the questioning is a step in the right direction, the group ‘regretted that the interior ministry did not launch any type of internal inquiry to put an end to these types of practices’.