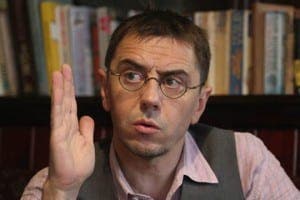 IN an unprecedented bid for transparency, the co-founder of Podemos has published details of his personal assets.

Juan Carlos Monedero, the anti-austerity party’s number three, has released the records in a bid to clear up doubts about the consultancy work he carried out for Venezuela and other Latin American governments.

A total of €48,528 of his earnings were from his work as a political science lecturer at Madrid’s Complutense University, while the remaining €370,969 was attributed to ‘economic activities’.

This is broken down into ‘international reports and consultancy work’, as well as teaching work, publishing books, presenting TV show La Tuerka and appearing in radio and TV debates.

The transparency is a bid to deny allegations of illegal party financing, and rumours that the party attempted to disguise its connections to Latin American governments.