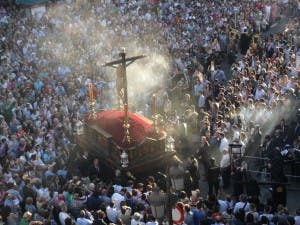 NOWHERE on earth marks Easter with as much wild enthusiasm as Spain.

Celebration, ceremony and crowds will descend on cities and pueblos countrywide, with Sevilla’s 50,000 robe-wearers making up the most famous processions on the planet.

Thousands are set to flock to Andalucia’s cities in rituals that can be traced back to the 16th century. Expect to see:

Religious brotherhoods (cofradias), formed to regulate the Catholic doctrine in their communities, their processions intended to showcase the customs of the Catholic Church

Today, the cofradias are highly organised groups that take their responsibility extremely seriously and can have up to 3,000 nazarenos

Each group holds a procession from its parish church to a set point and back again, parading their unique Virgin Mary and Jesus statue

The hooded nazarenos, with pointed hoods and medieval robes colour-coordinated with their cofradia, are dressed as such to repent in anonymity

Pasos  –  the floats – can weigh up to five tonnes and are carried on the shoulders of as many as 100 members of a cofradia, some barefoot in extreme penitence

Sacred gypsy song la saeta is the soundtrack that condenses centuries of tradition, notoriously difficult to sing and reserved for holy week

SEVILLA welcomes up to a million visitors for holy week. Crowded but extremely impressive, there are almost 70 cofradias and between six to nine processions each day. The longest lasts a marathon 14 hours.

The early hours of Good Friday are the highlight of week. La Macarena – one of Sevilla’s two favourite virgins – emerges from her Basilica at midnight and gran poder can be found in the Basilica del Gran Poder from 1am, with Esperanza de Triana leaving Capilla de los Marineros at 2.10am.

MALAGA has been celebrating semana santa since it rejoiced the the Catholic Monarchs’ arrival in 1487, but its contemporary federation of cofradias didn’t take shape until 1921.

The cheering and musical accompaniments make Malaga holy week different to the hush of other cities. Also remarkable are the size of its floats, sometimes over five metres long and carried by 260 people. Antonio Banderas makes a special effort to attend Malaga’s celebrations – he often leads the Virgen de las Lagrimas y Favores procession.

THE AXARQUIA offers an outdoor reenactment of Christ’s crucifixion with a cast of 600 locals in Riogordo – almost a quarter of the town’s population! This Passion of Christ tradition El Paso, established in 1951 is one of Spain’s most unique events. Attracting 10,000 spectators to the El Calvario outdoor auditorium, it is held in two acts on April 3 and 4 at 4.30pm. Tickets cost €5-8.

MARBELLA and San Pedro come alive in holy week. With nine brotherhoods,  the emotive highlight of the week is the silent procession of the Yacente (Reclining Christ) which departs the Santo Sepulcro on Good Friday at 9.30pm.

ESTEPONA has daily processions throughout holy week along Calle Real and Calle Terraza with celebrations culminating on Easter Sunday with processions leaving Iglesia del Carmen at 11am.

MIJAS combines culture with religious fervour with many activities for children throughout the week and adheres to the most pious of Andalucian traditions, kicking off Holy Thursday with the first procession at 6pm and going into a traditional day of mourning on Good Friday.

RONDA has been celebrating Holy Week in style since 1538 and sees 15 processions from 14 magnificent brotherhoods. Many cross the Tajo at Puente Nuevo into Plaza Espana and the night of jueves santo and viernes santo are highlights.

With Thursday and Friday of Easter week national holidays, the UK’s Easter Monday is business as usual for Spain.