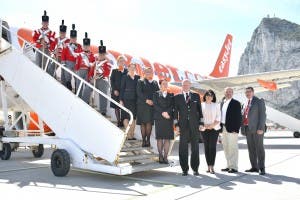 The inaugural flight took 147 passengers from Bristol to Gibraltar and the 156-seater A319 aircraft should attract 39,000 visitors per year.

The new route is due to operate three times per week on Tuesdays, Thursdays and Sundays throughout the year.

Ashley Fox, MEP for the South West of England & Gibraltar, said: “Gibraltar has always been a bastion of British culture and the gateway to the Mediterranean.

“I would encourage everyone in the South West to visit Gibraltar and enjoy the sun, sea, sand and friendly atmosphere of The Rock and I hope that many Gibraltarians will travel to the South West and enjoy our famous hospitality as well.”