Solar power exclusively heats and powers the writer’s Alpujarras farm thanks to Andalucia’s 320 days of sunshine a year.

But if new government regulations are passed, tariffs will be 27% higher for those generating energy at home.

“I am appalled by the cynicism, hypocrisy and downright dishonesty of this act by the government, but I have lost the capacity to be surprised by them,” Stewart told property expert Mark Stucklin.

And Spanish union UNEF claims the average consumer would need 31 years to get back the investment needed to install their own system, with fines of up to €60 million for non-regulation installations.

UNEF accused the government of ‘closing all doors to energy self-sufficiency’. 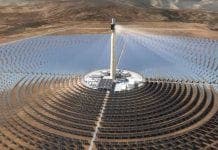