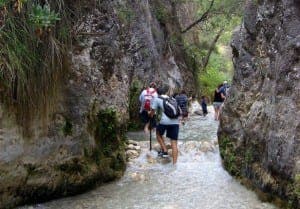 HUNDREDS of tourists and locals are to be banned from Nerja’s Chillar River.

The river has been turned into a tourist hotspot over the last few years, with residents and tourists using it as a ‘water park’ in the summer.

But the fun looks to be coming to an end.

New government proposals are set to restrict access to the river, after it became overrun with rubbish and the walls were graffitied on.

“We need to do our best to prevent the widespread increase of tourists in the area and the damage to such a valuable site,” said environmental councillor, Jorge Bravo.

“We can no longer turn our backs to this problem, but look for creative solutions that will also mean new jobs for our residents.”

Proposals to limit the number of people using the river have been mooted as well as making it an outright ‘no-go’ zone.