IT slips down perfectly with a slice of manchego on a balmy summer’s evening, loosens the tongue and, after another glass, your inhibitions too. 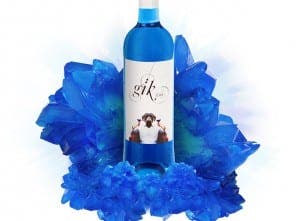 But that’s as far as tradition goes with the latest wine turning heads in Spain, GiK, which is not white, nor red, nor rose. It is in fact bright blue.

The country’s first blue vino has been developed by a group of six entrepreneurs in El Bierzo, Leon, who between them have absolutely zero past experience of traditional winemaking.

The aim was to create a wine that was not focussed on the tastes and preferences of so-called connoisseurs, but rather normal, creative and daring people.

“We wanted to create a sweet and drinkable product, in tune with the changing world where maybe the wine industry needs a little revolution,” said a spokesman.

Two years of research in collaboration with the University of the Basque Country went into creating the final product, which undergoes a chemical process to change the colour and flavour.

Unlike traditional wines, GiK has no rules. It can be drunk at any time of day, in any way and with any or no food.

GiK is produced through a pigmentation process. At first a base is created from a mixture of white and red grapes, which is then added to two laboratory-formed pigments; anthocyanin and indigo.

The last step is to soften the wine using non-calorific sweeteners.

It is now being produced and bottled in various wineries across Spain, and can be purchased online at www.gik.blue

Valencia is Spain’s most expensive city for water bills