THE season of goodwill is the one time of year to drink copious amounts with distant relatives… so this year why not take the family on a trip to meet Spain’s most famous uncle, Tio Pepe.

Jerez means sherry, and like a cantankerous old English aristocrat the town has grown large on the stuff.

In fact, the importance of the wine industry is obvious from the moment you set foot in the town… And that is never more apparent than at Christmas when the bars are packed with tipsy Jerezanos belting out gypsy carols, known as zambombas, throughout the night.

Arriving at Plaza Esteve in the heart of the old town on a Saturday lunchtime you could be forgiven for thinking that it is a town of drunks, with packed bars leaving customers sprawled outside onto the pavement and into the nearby market.

Tio Pepe, a flinty, white fino, is the town’s most famous tipple and there is no escaping the logos, which stretch across the old town and down to its bodega… not to mention numerous roadside hoardings around the region, along with the famous bull of Osborne, from the nearby town of El Puerto de Santa Maria.

If you follow the stream of tourists down from the market, you will arrive in Plaza Arenal, a beautiful spot, originally used as a space to amass troops before battle.

Nowadays more laid back in atmosphere, bitter orange trees and date palms line up regimentally around the central fountain as a substitute for the soldiers, who would once have stood in the same spot, with more cafes, bars and restaurants springing up beyond.

All around the charming centre you will find an amazing catalogue of grand and sizeable mansions, the majority built out of profits from the sherry industry.

When sherry was first exported to England in the 13th century the drink took the name of the Jerez, albeit by an anglicized version of ‘sherry’. 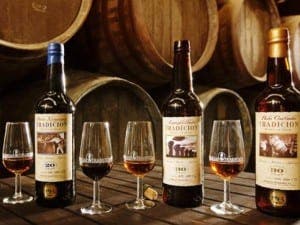 The city’s remarkable growth was kick-started by the arrival of large-scale wine production in the 17th century, but sherry and wine have been produced in the area for around a thousand years.

Even the arrival of Islamic forces in 711 did not kill the wine industry, which was tolerated as a ‘source of energy’ for troops.

Today, after decades of being in decline, the industry is making a much-greeted comeback, thanks to a revival, in particular, in the UK.

The historic bodegas continue to get the highest ranking, in particular from Robert Parker, for wines in Spain, and the huge bodegas, often dubbed ‘the cathedrals’ of Jerez, are a joy to have a look around.

The highlights are Lustau and Gonzales Byass, open every day, as well as Fundador, the producer of the UK’s famous Harvey’s Bristol Cream.

On a midday tour, you not only end up with a fantastic tasting of the many varieties of sherry, but an excellent explanation of how they are made.

At Fundador you follow in the footsteps of Bo Derek, Placido Domingo and Charlton Heston, and end up at the biggest wine bodega in Europe, La Mezquita, which houses a staggering 40,000 butts, as they are known.

If time allows you must definitely visit the Alcazar castle with its arabic baths, gardens and mezquita, as well as the cathedral, with its incredible vaulted ceilings, wooden figurines and a painting by Zurbaran.

But simply wandering around the back streets of the old town, in particular up to the neighbourhoods of San Miguel and Santiago, is a joy.

The winding cobbled streets are full of decaying, genteel mansions, sleepy squares and thankfully plenty of ‘tabancos’, where you can dip in if its raining, for a glass of ‘sack’ as Shakespeare once described sherry.

Reindeer may be more seasonal but Andalucian horses are a symbol of Jerez and a good example of the way the town is trying to take advantage of its assets.

Originally used as a war horse, and historically used as a gift to European kings, the Carthusian breed of the Andalucian Horse is now used for activities ranging from dressage to polo.

Displays are regularly held at The School of Equestrian Art, which promises a tightly choreographed ‘equestrian ballet’ though winter visitors should be aware that shows are less frequent prior to Christmas but will begin again in January.

But if horses don’t take your fancy, there is only one must-see attraction in Jerez – flamenco, with the city boasting an annual festival in February and being credited as one of Spain’s key centres for the musical genre.

The club – Pena Flamenco Los Cernicalos – sits on a quiet back-street, with only a small plaque on the door distinguishing it from the houses on every side and is far and away the best place to catch a show.

But tourists should be warned – the flamenco on show in Jerez is a million miles from the cruise-ship stuff of frilled shirts and flamboyant costumes. This is serious stuff.

Though its origins are hotly debated, it is agreed that flamenco moved across Spain from Andalucia during the 19th century, brought by refugees and travelers who were forced to flee their homes.

Jerez became a hub of flamenco partly because of its status as a haven for gypsy communities evicted from elsewhere, and the songs reflect the pain woven through their stories.

And in many ways, flamenco songs seem fitting in a place which is still stinging from the economic crisis. Indeed it is one of Spain’s poorest cities, with a debt to the tune of over a billion euros and an unemployment level of 30%.

Lying behind the idyllic image of wineries and dancing horses, the songs make as much sense today as they did when they were written.

And yet, wandering the streets on a cool winter’s evening with uncle Pepe’s coat staving off the chill is as perfect winter getaway as one could imagine.