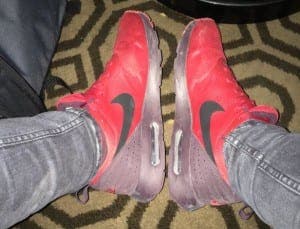 YOU’D think being a treble Michelin-starred chef would give you carte blanche in London’s top eateries.

But Madrid’s DiverXO chef David Munoz had a nasty surprise when smart celeb hotspot restaurant Sketch turned him and TV presenter wife Cristina Pedroche away because they were wearing trainers.

He took to twitter to vent his rage, saying ‘Really? In London? In 2015? Absolutely unbelievable’, before posting a photo of his red Nike trainers which retail at over €100.

“At Sketch, men must wear a smart jacket and you simply won’t be allowed in if you are wearing shorts or trainers,” Sketch’s duty manager told the Olive Press.