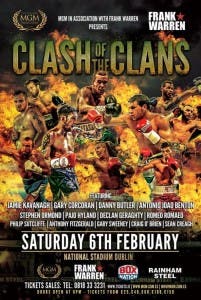 A group from MGM had apparently gone over to the Dublin event, which the gym has helped to promote.

Multiple shots were fired by anonymous gunmen dressed in police uniforms, leaving two other men – all three in their 20s or 30s – seriously injured.

The weigh-in was ahead of Saturday’s Clash of the Clans, including a WBO European lightweight title fight between MGM’s Jamie Kavanagh and Portuguese Antonio Joao Bento.

Kavanagh, originally from Ireland, lost his father Gerard in September 2014 when he was shot at a bar in Marbella.

The scene of today’s shooting has been sealed off and a Gardai technical examination of the area is expected to take place imminently.

An Olive Press source said: “This looks like it could be to do with the Irish gangland war we have seen before.

“There has been a lot of settling the scores in the past within Irish boxing and Costa del Sol gangs.”

Other MGM boxers Declan Geraghty and Anthony Fitzgerald were also due to fight.

The event has now been cancelled.