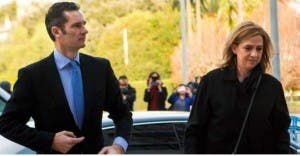 THE husband of Spain’s Princess Cristina put fake employees on his company’s payroll, a court has heard.

Inaki Urdangarin and business partner Diego Torres used the names of family members and even domestic staff to create bogus workers and salaries.

The pair split the fake salaries between them from their company the Noos Institute, according to former accountant Marco Antonio Tejeiro.

Urdangarin is facing 19 years in prison if convicted in the fraud and embezzlement case at Mallorca Court.

His wife Cristina, who is to give evidence this Friday, is facing an eight-year sentence for fraud.