IT’S 20-storey hulk has been the scene of more fighting than a Die Hard film.

But the fate of Spain’s most controversial hotel has finally been decided.

“Nobody thinks this hotel will ever disappear from this beach,” a Greenpeace spokeswoman said in 2007.

But after a decade-long struggle, the demolition of the hotel – a sprawling symbol of the building excess of Spain’s boom years – could now finally be on the cards.

It’s been a long road to arrive at this point.

In the early 90s, developers Azata del Sol had a vision. A four-star, 32,660-metre square hotel, 100 metres back from the sea with serene Mediterranean views.

It would hold an 18-hole golf course and 1,500 homes. The community at nearby Carboneras would feel the economic benefit. Everyone would be a winner.

In 2003, the Junta granted a licence to start building work.

There was just one problem.

So in 2005, Spain’s government ruled the hotel had broken the Coastal Law, which forbids building within 330 ft of the sea. The government ordered its demolition.

The decision set into motion a decade-long series of legal u-turns and twists.

In February 2006, judge Jesus Rivera ruled that building work on the hotel – by now 95% complete – should halt. In 2008, Rivera annulled the hotel’s building licence.

Azata del Sol fought back vigorously, launching eight appeals against the hotel’s illegal status between 2006 and 2009,.

In 2007, in a scene straight out of James Bond, 30 eco-warriors scaled the building and daubed the words ‘Illegal Hotel’ in jet-black, three-storey-high letters across its gleaming white facade

By 2009, the Junta was facing criminal charges for falsifying documents to enable building work to start. Rivera stated that the hotel’s construction was ‘illegal’ and would be ‘devastating for the environment.’

Two years later, despite winning a series of court victories, Greenpeace campaigners had resorted to squatting in El Algarrobico to demand its demolition.

The court’s decision that El Algarrobico had been built using a legal permit was a hammer blow to protesters.

“This monstrosity is the symbol of the destruction of our coasts,” said a Greenpeace spokesman.

“The council continues to believe that the best option for this hotel after such a huge investment is that it is completed and opened to provide wealth and jobs for the town,” said Salvador Hernandez, the mayor of Carbonera.

The case took yet another twist in April 2015. The Junta stepped in to repossess the land, returning €2.3 million to the developers, who had refused to hand over the plot during the original rulings.

Yesterday’s Supreme Court ruling appears to put a seal on the case.

It has decided the El Algarrobico’s is in ‘an environmentally protected area’. Finally, this vast behemoth may now be reduced to rubble. 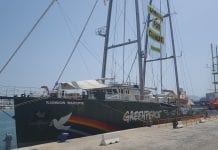 Charlie Smith - 3 Jun, 2020 @ 13:12
THE Junta de Andalucia has ordered all ferias to be cancelled until September amid COVID-19 fears. Health chiefs have...