WITH its enviable sunshine record, a nice day for a white wedding is virtually guaranteed in Spain.

Or indeed, any kind of wedding, since gay marriage was legalised in 2005.

In fact, more blushing brides, grooms and same-sex partners tied the knot in Andalucia than in any other part of Spain in the first half of last year.

The 12,078 happy couples know what we know: this part of the country is a magical place for any party, so where better to celebrate the most momentous occasion in your life?

Destination weddings have worked their way to the top of most courting couples’ wish lists. And with its reliable weather, swanky hotels, exotic locations and budget-friendly prices, Spain is well-placed to cash in.

Celebrities already know it as a place where you can walk down the aisle in style.

With 320 days of sunshine a year and post-crisis prices still competitively low, there are some great deals around.

Sevilla was third only to Madrid and Barcelona for the number of weddings held between January and June last year according to Spain’s National Statistics Institute.

Wedding tourism is a growth industry, internationally worth around €14.9 billion, although not all the 60.8 million visitors flocking to Spain annually have cottoned on.

“Destination weddings are 99% of our business now, and we are seeing a huge amount of people coming to Spain from all over the world to get married,” Charles told the Olive Press.

“I have planned weddings for people living and working in America, Australia, Singapore, Hong Kong and Dubai, many of whom had family in the UK and wanted to guarantee good weather – Spain is such a central destination.

“And there are so many beautiful places here and some fabulous suppliers, so who can blame them?”

True, the legal niceties of getting spliced in Spain can be a tangle of red tape for non-residents. For this reason, many ‘destination wedding’ couples do the official bit at home or were they were born, then head to Spain for the dream ceremony, whether at a gala dinner under the stars or beneath a floral bower on the beach.

Sandy feet aside, it is worth knowing that civil partnerships are only available to couples where one member has lived in Spain for at least two years.

But whereas new arrivals may struggle to get a civil partnership at the drop of a top hat, there are no such legal stipulations for Roman Catholic ceremonies.

Irish wedding planners in particular have cashed in on this loophole, Charles reveals. No less than 250 Irish people tied the knot in the first half of last year.

Blessings are another option popular with those who don’t want the religious pomp and circumstance but find a registry office ceremony about as exciting as going to the dentist.

There are several priests and officiators along the coast who offer blessings, among them local hero Padre Peter, who already has 57 weddings booked in for this year.

“For many couples, the ceremony I perform is far more valid than the dry legal formality of the civic registry,” Padre Peter told the Olive Press.

A working priest who has been a university tutor in World Religions, he has also provided Hindu, Jewish and Muslim ceremonies, and is nothing if not flexible and accommodating.

Other British expats in search of a more traditional experience opt to wed in Gibraltar, ‘a la John and Yoko – quick and convenient – or fly to Blighty for the ‘legals’ and hold the after-party back here.

In fact, with budget travel companies offering better deals than ever, your guests can likely fly to Malaga more cheaply than they can take a train to Gretna Green at certain times of year!

And with most obstacles that made a foreign tryst taboo swept aside, there are many more ways to get hitched in Spain, from a discreet poolside ceremony in a private villa to the full church Monty with all the bells and smells.

A swanky hotel wedding is another way to go and Marbella’s are renowned for their knockout nuptials, such as The Marbella Club, Finca Cortesin or the Castillo de Santa Catalina in Malaga, where Rick Parfitt Jnr plighted his troth under the auspices of Padre Peter.

Another favourite is the Tikitano Restaurant just outside Estepona.

Expats Seamus and Alena Hayes said ‘I do’ there in July 2014.

“Having the ceremony and reception in one place was a big attraction, and the wedding was set with a backdrop of the beach which was a dream come true for us both,” Seamus told the Olive Press.

“Having a Spanish theme was very novel for our overseas visitors, and eveyone really enjoyed the flamenco dancers!”

He continued: “Also, family and friends were able to stay in nearby Estepona and could meet up and spend quality time together. We wouldn’t have changed a thing!”

A wedding planner like Reviva can take care of the logistics, from organising the photography to flying out guests and extended families for a full-blown three-day affair.

The average wedding budget racks up an eye-watering €30,000, although many couples prefer to spend less on a more intimate, low.key event.

Low-key and low-budget may well have been what Audrey Hepburn’s son Sean was after when he rented out Granada’s Alhambra Palace for a concert in 2014, and allegedly got married in the middle of it.

The palace’s board accused him of using the concert to clandestinely stage the ceremony at the palace, which is not allowed, and which he denied.

It was not the only ‘first’ for Spanish weddings in recent history. Spanish bobbies Chema and Jonathan made history when they got hitched in full uniform at the country’s first ever gay police wedding in Jerez last September .

Spain’s wedding scene is certainly diverse. But that’s to be expected of a country celebrating 11 years of legalised gay marriage and touting itself as the LGBT fun capital of Europe.

Although 2006 was the busiest year for same-sex weddings, when uncertainty over whether the law might be repealed set off a stampede, the figures have averaged over 3,000 a year ever since.

But the marriage business in Spain is booming across the board.

And with Madrid Ciudadanos councillor Sofia Miranda pushing for weddings to be held at the magnificent Finca Torre Arias, recently gifted to the town hall, Madrid will be able to compete with top destinations, like Florence, which raked in €100 million in weddings alone last year.

And no wonder, when couples can marry in settings as stunning as the Uffizi gallery.

Gay or straight, church or registry office, beach or banqueting suite, there’s never been a better time to get married in Spain.

Over twice as many people come from abroad to marry here as Spaniards go elsewhere to get wed, which rather speaks for itself! 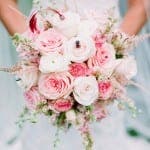 Bouquet for the virgin

WEDDING customs vary across Spain and in some areas, for example, the bride offers her bouquet to the Virgin Mary; while in others it’s given to a best friend or thrown into the crowd.

It is also common to throw rice, not confetti, over the bridge and groom. 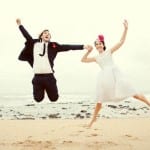 Plan for the heat

IN Andalucia, summer weddings unsurprisingly take place at around 7 or 8pm, after the oppressive heat of the day has subsided.

After a short wedding ceremony it’s usually off to a local restaurant – or ‘celebrations’ venue – for the set meal or buffet with plenty of wine that flows until the early hours until no guests are left! 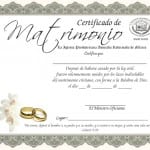 In Andalucia the following are generally required, but do vary from town to town

The Archbishop has the final say but, generally required