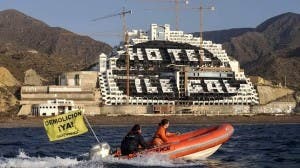 DRIVING over the coastal mountains from the Almerian tourist trap of Mojácar to Carboneras is a delight.

You pass through the hamlet of Sopalmo, which sits in tiny splendour over a sandy track that leads drowsily down to the sea, a mile away. Here is one of only two places in Spain where you can find chameleons. Cristobal has a small restaurant there and will fill you up for €10 while the kids go exploring with their butterfly nets.

We are at the edge of the gigantic – and generally rather empty – Natural Park of Nijar/ Cabo de Gata.

But before the large municipality of Nijar, increasingly covered with ‘plastic farms’, we must pass through Carboneras, the ugly fishing town made famous by the Algarrobico Hotel.

It’s been over a decade since a judge ruled that it was illegally built on a beach inside a natural park. Now, after millions spent on legal fees and hundreds of stories, it is finally to be knocked down.

The curving road passes the hill of the ‘Moors Blood’ – a colourful slab of streated rock where a battle may have taken place half a millennium ago – and zigzags towards the highest part of the route towards Carboneras, with crags on one side and alarming drops on the other: a road straight out of The Italian Job – or, perhaps the perfect final scene for Thelma and Louise.

At the top, there’s a small parking area, liberally decorated with graffiti, where you can see for miles. My camera records an empty dry mountain, a rugged coast, clean blue sea and – off to the southwest – the back of a monstrous hotel, several miles away and far below.

The only plant-life in this – and most – of the Parque Natural is scrub: no doubt of huge environmental value to our friends the ecologists but, dress it how you will, it’s scrub none the less.

The ecologists are simple city folk. They live through subsidies, European funds and obscure publications. They are like the Caliban of Shakespeare: rude destructive fellows, who flow out from their apartments in the suburbs to deal harshly with the countryside, subsidised by the gullible politicians from far-off Seville.

In Almería, the ecologists must ignore the 350 km2 tract of plastic farms, which do huge damage to the environment but bring much wealth. They will spend their time – and what European funds they can attract – on such foolishness as ripping up a small plantation of agave outside the city, a plantation that has been there for almost a century.

The plants, they say, are invasive. So too, they say, are the prickly pear cactus (brought to Spain by the conquistadores) – as the entire south east of Spain is plagued by an unstoppable cactus fly. The local tortoise must be protected, they insist (again, with European backing) so the harmless creatures are collected and sent to prison camps in the high sierras, where they solemnly die of the flu.

A French businessman told me 20 years ago: ‘In the next century, the two growth industries will be tourism and ecology’. Ten years later, in small and ugly town in Almería, the two forces finally declared war.

As the car breasts the final hill on the route to Carboneras , the rear of the ghastly hotel becomes visible again: surrounded by land prepared by the builder for shops, restaurants and an urbanisation of 250 villas (land, incidentally, which does not fall within the new frontier of the Natural Park, and is thus still theoretically viable).

These days, sightseers come to see the hotel. Aghast, they take pictures: perhaps they’ll stay for lunch in the town. Nearby is the small villa where Peter O’Toole stayed when filming part of David Lean’s Lawrence of Arabia. Just past the Algarrobico, on the other side, is the dry river bed where the Arab horsemen attacked Aqaba in that furious cinematographic gallop.

Carboneras is a reasonably well-off, if unusually ugly fishing town. It has three ports – commercial, touristic and industrial – some nice beaches, good fish restaurants, a huge power station responsible for producing 25% of all the CO2 that is clogging up the air in Andalucía, a vast and inoperable sports stadium and an unemployment rate of only 20% (Almería province has 25%).

Opening the Algarrobico and finishing off the surrounding satellite urbanisation would have brought many jobs to the town. But as a Greenpeace spokesman said after the latest judgement, ‘they can always help work on the demolition’.

The reality is that after 10 years of rotting in the sun and open to the elements, the 20-storey hotel would have been almost impossible to finish. Its time had come. But, what about the costs involved in demolition – money that could have been better spent? The politicians speak blithely of returning the several hundred metres of empty rocky scree back to how it was – but how impossible is that? And is it even worth the effort?

The justification for the demolition comes from a rule that you can’t build in a national park, even though the hotel was not in a national park when work began; indeed, the promoters bought the land from the Junta (through a public company called Soprea) in 1999, when it was still ‘urbanisable’. The boundaries were subsequently moved as the PP in Madrid changed the coastal building limits.

In 2006, the project which had previously won the blessing of the then Junta President, Manuel Chaves, fell foul of Environment Minister Cristina Narbona who ordered work stopped when the hotel was 90% complete: it was being built on public land.

Almería is a large province of 8,000 km2, of which 3,100 km2 are protected – about 35% of the entire province. We are talking here of perhaps one hectare. Couldn’t Almería afford to lose a tiny fraction of its empty, unvisited and largely pointless parkland to help create some jobs?

A recent interview with the President of the Superior Court of Justice in Andalucía says that ‘judges sometimes contradict themselves – we are human and can also get things wrong’. A spokesman for ‘Salvemos Mojacar’ does not suffer from the same doubts: ‘it must be demolished and the promoter should not be reimbursed by as much as one centimo’ (they seek €70 million).

So, as sometimes happens in Spain: the building can never be completed, and it can never be entirely demolished. Jobs are lost in an area of high unemployment, and a rotting and monstrous hulk of a building will perhaps be turned one day, after at least a decade of uselessness, into a mountain of rubble.

Perhaps the rabbits, its future residents, will be pleased.