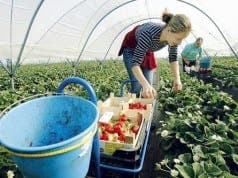 Companies including Sainsbury’s, M&S and Coca-Cola are campaigning over unsustainable water usage in Huelva and Sevilla.

The consortium of supermarkets and food companies claims current strawberry growing practices will lead to ‘severe environmental damage’ in the Doñana national park.

The group is now demanding the introduction of a land plan set out by the Junta in 2014 but yet to be implemented.

The plan includes the eradication of 1,500 hectares of unauthorised strawberry cultivation.

“We strongly support the land use plan issued by the government of Andalucia and urge all parties involved to cooperate on its urgently needed implementation,” a group spokesman said.

“We believe that continued pressure will ultimately lead to severe environmental degradation of the ecosystem and in particular the Doñana national park, as well as to a reduction in the long-term availability of strawberries from the region.”

Environmental campaigners claim that water used by strawberry farmers has reduced the wetlands by 50% through as many as 2,000 illegal boreholes.

The European Commission is currently investigating the claims.