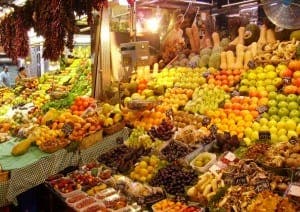 IN Barcelona, gone are the days where Spanish waitors would look at you blankly if you declare yourself vegetarian.

Officially declaring itself a ‘veggie-friendly’ city, the Catalan capital is swapping jamon for fruit and veg.

With the release of a vegetarian guide, the town hall is asking residents to stop eating meat at least one day a week.

Barcelona Town Hall is set to promote vegetarianism  by creating a new space for vegetarian and vegan businesses to meet.

The proposal was passed by the left-wing coalition while the PP and Ciudadanos abstained.

The news comes as Slowly Veggie magazine is introduced on the shelves of Spanish newsagents.